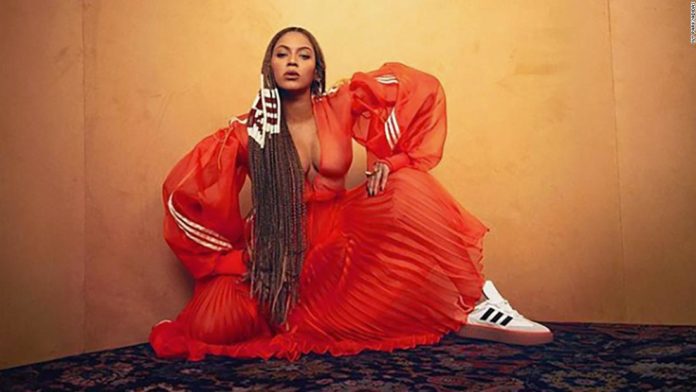 A limited supply of clothes and shoes from Beyoncé Knowles-Carter’s new Ivy Park x Adidas retail line dropped at noon on Friday – hours ahead of its scheduled Saturday release date – and started a social media frenzy. The #IvyParkXAdidas hashtag made it to at least #3 on Twitter’s top 10 trending topics in the United States during the day.
The pop star has been posting photos teasing the brand’s launch for more than a week. Her notoriously passionate fans – known affectionately as the Beyhive – tweeted non-stop during the afternoon about the new sports apparel after the beloved celeb shared new photos and videos of herself wearing the gear on her Instagram account.
Videos of the “Spirit” singer strutting, vogue-ing, twirling, twerking, jerking, and dropping it like it’s hot in maroon, orange and white Ivy Park tops, hats, shoes, hoodies, and windbreaker pants – some accented with Adidas’ signature three stripes – were posted on her Instagram story.
“She’s literally the cutest! #ivyparkxadidas #adidasxIVYPARK,” one fan account tweeted along with a video of Beyoncé dancing in her new clothes.
Adidas (ADDDF) signed a joint venture deal to make Beyoncé one of its latest celebrity brand partners in April of last year.
Beyoncé’s face was plastered all over Adidas’ website during the afternoon. A button click on the homepage took users to a page explaining the rules for a chance to be one of the first to obtain Ivy Park apparel.
“This is a limited release,” a pop-up message stated. “You’re in line for the new adidas x IVY PARK collection. Please wait for your chance to shop. Make sure you know which items you’re interested in – we’re expecting to sell out quickly.”
Smart phone users were directed to a separate “waiting room” screen.
“We’re almost ready to launch adidas x IVY PARK – final preparations are being made to ensure the drop is fair and bot free,” the message read.
Some fans reported on social media they had struggled to purchase the gear on Adidas’ website. A lucky few managed to get through.
“Got emmmm'” one purchaser tweeted.
Earlier this week, the 38-year-old, Golden Globe nominee made more headlines after sending Ivy Park swag to several celebs, including Zendaya, Hailey Bieber, Cardi B, Yara Shahidi and Reese Witherspoon. Pictures of the wealthy young stars receiving and sporting Bey’s clothes prompted some backlash from critics who lamented the celebrities could all afford to buy their own Ivy Park gear.
Adidas also has an active endorsement deal with Kanye West, whose Yeezy shoe line was projected to produce more than $1.3 billion in sales by the end of 2019, according to a June New York Times profile. Adidas did not immediately respond to emails seeking comment.