Home Sport Why Man Utd style can give them Liverpool faith 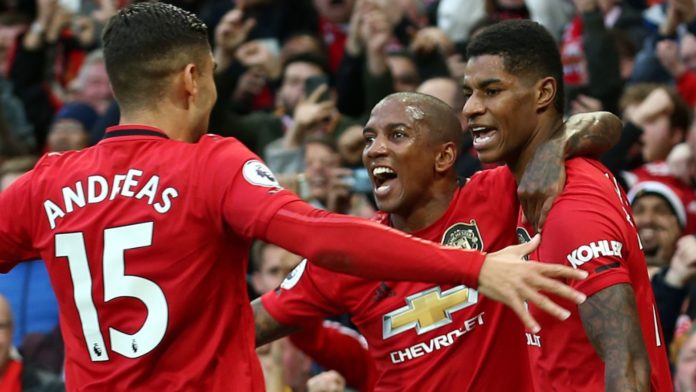 Liverpool are enjoying a record-breakingly rampant season – but there is hope for Manchester United of causing an almighty upset this weekend.

Being the best team in history across Europe’s top-five leagues, even halfway through a season, takes some serious doing. Racking up 20 wins from 21 games would have been beyond even Jurgen Klopp’s pre-season dreams, and however confident he may be, the public message is simple – nothing is won in January even with their near-perfect season.

Near-perfect is the operative word. The only blip in the road so far came back in October, when United ground out a much-deserved 1-1 draw at Old Trafford. Ole Gunnar Solskjaer surprised Klopp with an unfamiliar back three that day, and ended up winning the tactical battle. The German is yet to get the better of him in two drawn meetings so far.

Both of those games were at Old Trafford, a different challenge from the formidable fortress Liverpool have developed at Anfield, where they are unbeaten in the league in almost three years and face United on Sky Sports Premier League as part of Renault Super Sunday from 4pm; Kick-off at 4.30pm.

On the surface, there is little evidence of unfancied United ending that run, but Solskjaer’s side are perfectly set-up to play on the break – and since his return, they are the only Premier League opponent Liverpool have not found a way to beat.

United’s ability on the counter-attack owes nothing to chance. Solskjaer consciously changed the gameplan shortly into his reign, and they are far more at home utilising their raw pace as the form of Anthony Martial, Dan James and Marcus Rashford has shown. When the manager arrived in December 2018, they ranked bottom in the Premier League charts for the number of fast breaks they had completed. By the end of the campaign, they were number one.

“We’ve worked on counter-attacking ever since I became manager because that’s Manchester United,” Solskjaer said after a shock win at Manchester City last month, forged on utilising that lightning speed in attack. “For me it’s quick, attacking, flowing football with the right intent and when we win it, there’s no use of keeping it back to the ‘keeper if the chances are there to play through them and we did.”

That style of play has born fruit this season, too, but only when United are able to utilise it. They are the only side in the Premier League with a better record against the top half than the bottom. Teams who sit in and play for a point present a major problem – United have won five of six games where they’ve had less of the ball, but only four of 14 this season when they’ve had a majority of possession.

One major problem they face on Sunday will be to break down a Liverpool defence which last conceded a league goal on December 4, and which deals with transitions so well that they have been counter-attacked only nine times all season. United are responsible for two of those, though, and scored their opener from one when Rashford turned in James’ low cross back in October.

Their form in big games is down to more than just a counter-attack, though. United’s skill on the break is of little surprise to Pep Guardiola or Klopp himself when facing United – but Solskjaer’s often maligned side undoubtedly raise their game when they face big opposition.

“They worked their socks off, they didn’t let Liverpool get into the game at all,” was Graeme Souness’ assessment of United’s draw with Liverpool the last time these sides met. “United have been appalling away from home this season, so bad, so weak. But they showed such confidence in authority,” said Gary Neville six weeks later, after they stunned the Etihad and beat Man City 2-1 on their own patch.

United are always likely to run further in games where they have less of the ball, against opponents who can keep it better, but they cover an eye-catching average of 4.5km more per match against other top-six opposition. That has helped Solskjaer build a record of six wins and four draws from 14 games with their biggest rivals as they often outwork as well as outrun their opponents.

Individually though, the biggest lift for Solskjaer in big games this season will be the form of Rashford, so long as he is fit to play.

He has eight goals in his last 10 matches this season and an average of a goal a game against top-six opponents. His form ever since a wonderful solo strike against Bulgaria for England in October seems to have settled the debate that he is better playing off the left, and it is from here he may find the most joy up against Trent Alexander-Arnold, who by nature is one of the most attacking right-backs in the division.

“Every time they play Liverpool, Rashford exposes that space on the inside left, outside left, whatever, that is his best position, that’s where he scores goals and that’s where Manchester United need him,” former United assistant Steve McClaren told Sky Sports ahead of this weekend’s game.

“The key to this game is behind those Liverpool full-backs who get forward so much. Rashford will expose that space.”

Leicester positioned Jamie Vardy as an inside forward against Liverpool on December 28, with Brendan Rodgers hoping his pace would catch Alexander-Arnold out on the counter.

The tactic backfired with the Foxes unable to feed their top goalscorer, who was largely anonymous and touched the ball just 22 times. But with his recent form and three goals in six games against Klopp’s Liverpool in his career, if United can find Rashford he may be able to provide a different outcome.

There’s little doubt Manchester United will face their toughest test of the season when they visit Anfield on Sunday – but sometimes it brings out the best in Solskjaer’s side. And they will have to be at their very best to avoid the same fate dished out to all 18 of Liverpool’s other Premier League opponents.