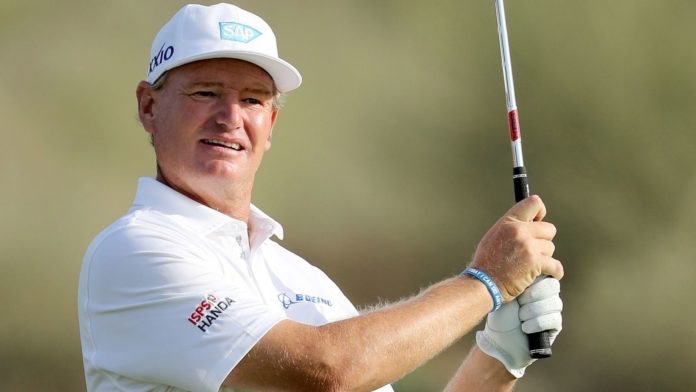 Ernie Els bounced back from a slow start to surge into contention on his PGA Tour Champions debut at the Mitsubishi Electric Championship.

Els, who shot a level-par 72 during the first round, posted a round-of-the-day 65 in Hawaii to get to seven under, lifting the South African inside the top-10 and within four strokes of halfway leader Woody Austin.

The four-time major winner followed four birdies in his first six holes with an eagle-three at the seventh, before cancelling out a three-putt bogey at the ninth by picking up shots at the 12th and 14th.

Austin holds a one-shot advantage over Bernhard Langer after birdieing the last to post a four-under 68 and getting to 11 under, with Miguel Angel Jimenez two off the pace in fourth spot.

Paul Broadhurst carded a bogey-free 66 to get the Englishman up to eight under and three off the pace, while Colin Montgomerie heads into the weekend eight strokes back in tied-23rd.

Brooke Henderson moved into a share of the lead despite a disappointing finish to her second round at the LPGA Tour’s season-opening Diamond Resorts Tournament of Champions.

The Canadian posted a five-under 66 to join former world No 1 Inbee Park on nine under at Four Seasons Golf and Sports Club in Orlando, giving the pair a one-shot lead over Gaby Lopez.

The only blemish came at the par-three last, where Henderson three-putted from the fringe to lose her outright advantage, while Park carded a bogey-free 69 to share the halfway advantage.

France’s Celine Boutier is two strokes off the pace in a share of third, with overnight leader Danielle Kang dropping to six under and Georgia Hall in the group eight shots back.

Vega moves ahead in Mexico

Jose Vega produced a stunning bogey-free round to open up a three-shot lead at the halfway stage of the Latin America Amateur Championship.

The Colombian holed out for eagle at the par-four third and posted four birdies to post a six-under 65 on another blustery day in Mayakoba, leaving him the only player under par after two rounds.

Vega’s round was four strokes better than any other player in the 106-man field, where the winner earns an invitation to the Masters and The Open as well as a spot in final qualifying for the US Open.

The 26-year-old’s nearest challenge comes from Chilean Lukas Roessler, who followed an opening-round 70 with a one-over 72, with Gabriel Morgan Birke four shots off the pace in third spot.

Overnight leader Ivan Camilo Ramirez slipped five stokes back to two over after failing to register a single birdie in a five-over 76, while Haiti’s Desinor Pierre finished bottom of the leaderboard after carding a second-round 112.