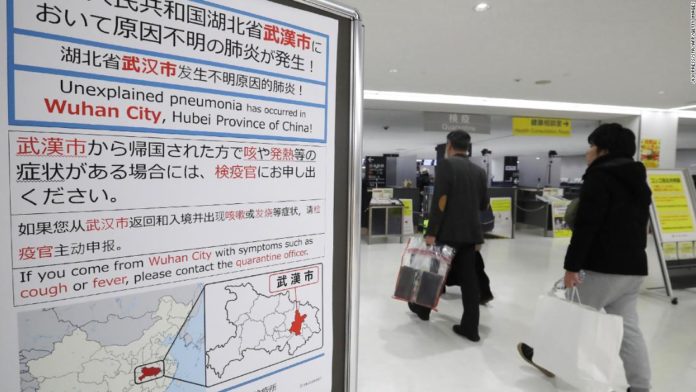 It’s a highly unusual step. The last time the CDC did routine passenger health screening was during the 2014 Ebola outbreak, according to Dr. Martin Cetron, director of the CDC’s division of global migration and quarantine.
“I’ve been here since 1996, and that’s the only other time we’ve ever done this — for Ebola,” Cetron said.
The screenings at New York City’s John F. Kennedy International Airport will start tonight, and screenings at San Francisco International Airport and Los Angeles International Airport will begin Saturday. The CDC will look for symptoms such as coughing and difficulty breathing and check temperatures of each passenger with an infrared thermometer.
The CDC took these steps after travelers from Wuhan recently arrived in Thailand and Japan infected with the new virus. There have been two cases in Thailand and one in Japan.
“Considering global travel patterns, additional cases in other countries are likely,” the World Health Organization stated in a press release Thursday.
Last year, more than 60,000 passengers flew into the United States from Wuhan, a city 700 miles south of Beijing. The vast majority flew into the three airports where the checks will take place, according to the CDC.
January is the peak travel season from China to the United States because of the Chinese Lunar New Year, Cetron said.
Cetron described the airport screenings as part of a set “proactive preparedness precautions.”
“We believe the current risk to this virus is low,” Dr. Nancy Messonnier, director of the CDC’s National Center for Immunization and Respiratory Diseases, said at a press conference on Friday. “For families sitting around the dinner table tonight, this is not something they need to worry about.”
At this point, it appears most people caught the virus directly from animals, and the infection does not spread very easily from person to person.
“This is not a time for people to freak out and be overly concerned,” Cetron said. “This is a time for vigilance and awareness.”
He added that much more common illnesses, such as the flu, are “much bigger threats” to Americans than the new virus from China.
“I’m fully aware that the unknown is more of a source of anxiety than that which is already defined,” he said. “But we should not freak out.”

What we know about the new virus

So far, two people in China have died from this new virus, officially called the 2019 Novel Coronavirus. Some 45 people in China have become infected. Some have developed pneumonia.
Coronaviruses, such as SARS, or severe acute respiratory syndrome, are common in many species of animals, including camels and bats. Sometimes — but rarely — they evolve and infect humans as well.
Chinese health authorities have reported that most of the patients in Wuhan had visited a large seafood and animal market. However, some patients in the outbreak reportedly had not been to animal markets, which suggests that “some limited person-to-person spread may be occurring,” according to the CDC.
At least for now, that spread appears to be quite limited. Cetron said it’s “reassuring” that Chinese authorities report that no health care workers who’ve cared for the patients have become infected, and that some 700 other contacts of patients have also not become ill.
“This isn’t anywhere near in the same category as measles or flu,” Cetron said. Those two infections spread easily from person to person.
To learn more about this new virus, health authorities are taking a close look at SARS.
In 2003, SARS spread to more than two dozen countries in Asia, Europe, North America and South America. Worldwide, more than 8,000 people became sick and 774 died. In the United States, there were 29 SARS cases and no deaths, according to the CDC.
SARS did spread person to person through close contact such as kissing, sharing utensils or talking to someone within 3 feet.
Cetron emphasized that this new virus may be different from its cousin and behave in unexpected ways.
“We have to have humility and appreciate that it may be different. We can’t just assume that what we know from previous viruses will always apply,” he said.

Cetron said he expects that “the vast majority” of passengers arriving from Wuhan will be healthy. CDC will give them information in English and Mandarin about what symptoms to look for over the next two weeks.
After further investigation, travelers that are symptomatic will be sent to local hospitals that work with the CDC.
Cetron said the symptoms of the new virus are so common that he expects the screenings will catch many more people with the flu or other winter viruses than with the new coronavirus.
If it turns out someone does have the new virus, they’ll be isolated in the hospital.
He added that while there are still many questions about this new virus — its incubation period, for example, or how easily it spreads from person to person — the progress on it in such a short time has been impressive, including a sequencing of the virus’ genome.
“It’s quite remarkable to me that from a cluster of pneumonia detected just a little over a month ago in Wuhan, China, we have fully sequenced the virus and have some diagnostic capability to test for it,” he said.