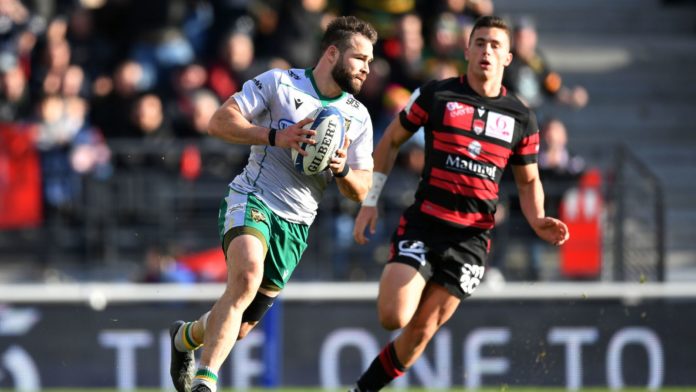 Northampton Saints face a nervous wait to see if they have done enough to reach the Champions Cup quarter-finals following a 36-24 win in Lyon.

That result ended Glasgow Warriors’ slim hopes of reaching the last eight, but the Saints must now wait to see how Ulster, Saracens and Gloucester fare in their final pool matches to see if they will be one of the three best-placed group runners-up to qualify.

It was by no means easy for Chris Boyd’s men as their French opponents turned in their best performance of the pool stage, with scores from Felix Lambey, Liam Gill and Charlie Ngatai.

The visitors seized the initiative when Lyon prop Francisco Gomez Kodela was shown a yellow card in the 19th minute following a string of line-out infringements from the hosts.

Northampton kicked to the corner and powered the resulting lineout over the line for the opening try, with Haywood the beneficiary, but Dan Biggar’s conversion attempt was off target.

However, Pierre Mignoni’s side responded with their first try six minutes later. Scrum-half Sam Hidalgo-Clyne found a gap in the Saints’ defence and passed inside to Lambey, who scored unopposed at the posts, with Jonathan Wisniewski adding the conversion.

Lyon’s second try followed in the 34th minute as quick thinking from Australian back-rower Gill saw him take a quick tap penalty and drive over the line after a period of pressure from the home side inside the Saints’ 22. Wisniewski was on target with his conversion again to extend the lead to nine points.

The fly-half then kicked a straightforward three points to give Lyon a 17-5 advantage at the break after Northampton were penalised for holding on five metres from their own line.

The Saints were not done yet, though, and came out fired up for the second half, winning a penalty from a scrum against the feed following a knock-out by South African scrum-half Reinach.

Northampton duly secured the lineout ball after kicking to the corner and, from the next phase, Harrison showed determination to power over the line for a try in the 46th minute.

Biggar’s conversion was good and the Wales international cut the deficit to just two points with a penalty after Harrison had knocked on with the line seemingly at his mercy while the referee was playing an advantage.

Northampton then retook the lead in the 65th minute after World Cup-winner Reinach outpaced Noa Nakaitaci to collect Biggar’s kick upfield and run in at the posts.

Their lead was short-lived, however, as centre Ngatai evaded a couple of tackles to score, with Wisniewski kicking the conversion to restore Lyon’s two-point lead.

Yet Boyd’s side rallied to go ahead again in the 72nd minute after full-back Furbank sprinted through a gap and rounded opposite number Toby Arnold to score.

Saints then put the result beyond doubt when replacement hooker Fish crashed over from short range for the Premiership outfit’s fifth score of the afternoon.

Northampton will now have their attention focused the outcome of Ulster’s game against Bath on Saturday, plus Saracens’ clash with Racing 92 and Gloucester’s trip to Toulouse – both of which are on Sunday – to see if they have done enough to secure a quarter-final spot.