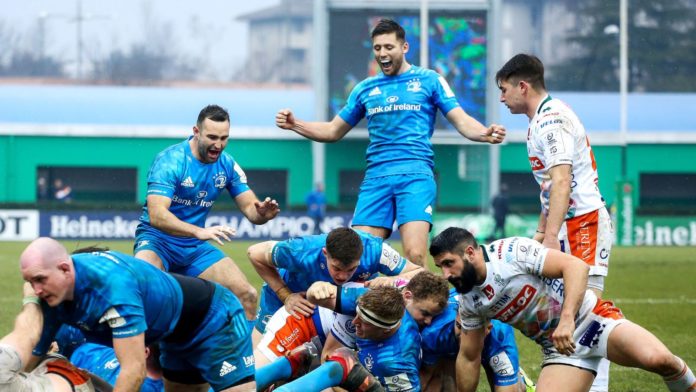 Leinster clinched top-seed status and a home Heineken Champions Cup quarter-final as they made it a record-breaking 16 wins in a row in all competitions this season with an 18-0 victory at Benetton.

It passes the previous record of 15 wins set by Leinster in 2001-02 for successive victories by a European club.

Leo Cullen’s men had to battle hard against Benetton, with Caelan Doris and James Tracy tries in the second half helping them overcome the Italian side.

Leinster advance through the Champions Cup pool stages with a record fifth European crown very much in their sights.

Benetton – with just one win from Pool One – made life tricky for Leinster and began brightly at a dark and damp Stadio Monigo, but they failed to make their early pressure count.

A number of early penalties, all of which the hosts elected to kick for touch, kept Leinster on the back foot, with No 8 Doris sent to the sin bin for taking a man out in the air at the line-out.

Despite multiple half chances, Benetton could not capitalise on the man advantage as the game looked set to be scoreless at the interval. But Leinster were able to assert some control, with Ross Byrne kicking a penalty in front of the posts five minutes before the break.

Benetton lost Irne Herbst almost immediately after the restart for a deliberate knock-on, but Leinster – far from their fluent best – could only increase their lead by three points, with Byrne kicking well from distance.

That seemed to shift the Irish province into gear as they turned the screw in the final quarter. The pressure soon paid off as the impressive Doris – buoyed by his recent call-up to the Irish squad for the Six Nations – collected Luke McGrath’s smart, flicked pass and forced his way over for the game’s first try.

Six minutes later Leinster added to their score with a well-worked rolling maul from the line-out, as replacement front-rower Tracy crossed in the corner. Byrne kicked the conversion and that was as good as it got for the visitors, who did enough throughout to keep Benetton at bay.