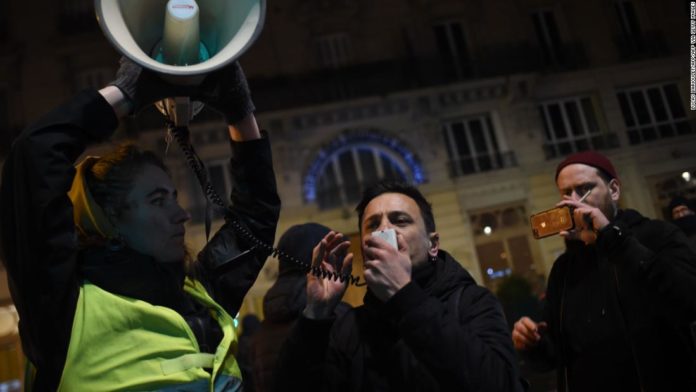 The Elysee presidential palace told CNN that protesters had tried to enter the building, while video on social media shows police tussling with protesters outside the Bouffes du Nord theater’s building. Several demonstrators entered the building before being dragged back out by police.
Riot police holding up shields formed a line against the protesters, who shouted “Macron, out,” in the latest of more than a month of protests against the embattled President’s pension reform plans.
The President and his wife, Brigitte Macron, “were secured” for several minutes but were able to return and finish watching “The Fly,” French news agency AFP reported, citing sources from the President’s office.
French newspaper Le Monde reported online that police called for reinforcement to quell the protests and to escort the President and his wife home.
Journalist and political activist Taha Bouhafs posted a video from inside the theater showing the back of the President’s head, making comments that allegedly invited activists to come and disrupt the show.
Bouhafs has been arrested over the tweet, on suspicion of taking part in a group formed to commit violence or damage, a French judicial source told CNN.
Protests across France over pension reforms have hit fuel and power supplies, and cause large-scale transport disruption and the shutdown of schools. Macron says the changes are necessary to make the system fairer and more sustainable, but unions say workers will lose out.

CNN’s Angela Dewan and Arnaud Siad contributed to this report.