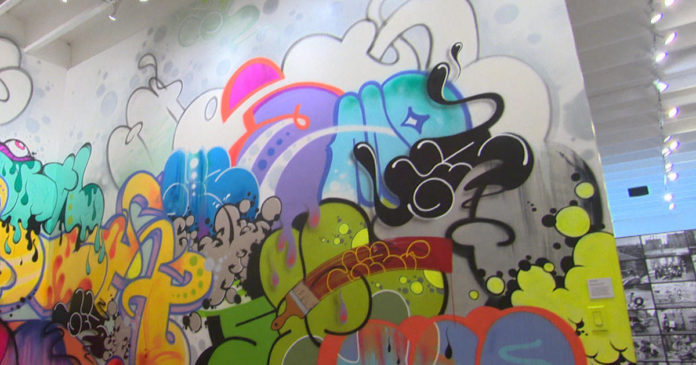 Graffiti artist Steve Ogburn, known as Blade, was part of the birth of modern graffiti in the 1970s and ’80s, considered one of its pioneers. Ogburn covered more than 5,000 New York City subway cars in color, captured in photos now on display at the new Museum of Graffiti.

“And you’re doing this in the middle of the night?” asked correspondent Kenneth Craig.

“This is at 2 o’clock in the morning, pitch dark, standing like this next to a train,” he said.

“You got the point where you became a master at NYC subways?”

“Well, in the tunnels, because I could really run really fast. Six feet tall, probably 130 pounds, 29 inch waist, I mean, I could move!” he laughed.

The 3,200-square-foot museum is packed with more than 300 pieces of the movement’s history and the artists behind it – artists like Blade, whose trailblazing work earned him the title “The King of Graffiti.”

Craig asked Blade, “Did you even think this day would come?”

“No, of course not,” he replied. “Because it’s an art form created by young people for young people. And when I started, there were no masterpieces.”

Graffiti artist, historian and collector Alan Ket said his intention in setting up the museum was to present a historical timeline: “To show you from the beginning of the style writing movement, the graffiti art movement, to today.”

Ket partnered with former state prosecutor Allison Freidin as she was doing advocacy work for graffiti writers. The duo co-founded the museum not only to educate the public, and preserve the history, but also to provide visitors a counter-narrative.

“That was really the goal for both Alan and I, to sing the song of unsung heroes who have contributed so much to our culture,” Freidin said. “Yet, the artists who pioneered that were routinely shunned for their work.”

“There was a war on graffiti for decades,” Ket said. “But what does that even mean? That just means you’re cleaning it up. That means that you’re incarcerating young kids and perhaps exposing them to real criminals and real criminal activity, real criminal life.”

Ket’s legal run-ins over his work landed him a number of lawsuits, and in 2007 a headline-making plea deal with New York City prosecutors.

Craig said, “There still will be people who will watch this and say, ‘That’s not art. That’s vandalism.'”

“I think that those folks that say that should come and visit us and take a walk with me, so that I could explain to you why this is an art form and how this art form was created and how it’s evolved and developed and gone around the world, and how it now sells for millions of dollars,” Ket replied.

It’s what he’s now doing inside the collection, and out on the streets, where the museum team has commissioned 11 murals. The institution opened in Miami’s Wynwood neighborhood: a former industrial district that, over the past decade, street artists have transformed into a vibrant and massive open-air gallery, and a popular tourist destination. Here, aerosol artists from around the world have free rein.

Some of the museum’s artifacts are from Alan Ket’s personal archive. For him, the museum’s opening, and the celebration that followed, was the ultimate validation.

“When you grow up as a child and your parents tell you that this is something wrong, and then when you go to school and your teachers are telling you, ‘This is wrong, you’re going to be a loser for the rest of your life,’ and society finally catches up to celebrate you, it’s incredibly moving,” said Ket. “It’s an emotional experience. You never think that you’d make it to a place that finally got it.”