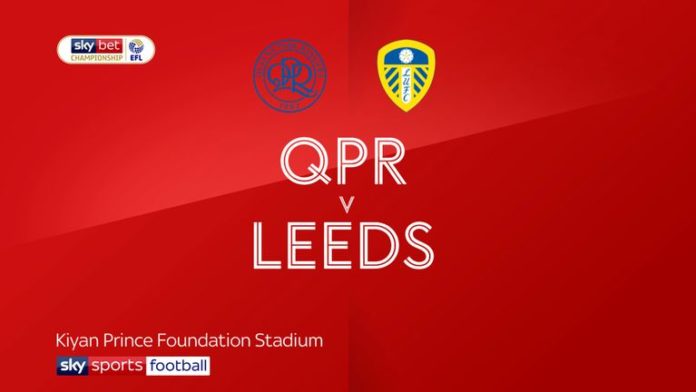 Leeds missed the chance to return to the top of the Championship as their worrying form continued following a controversial 1-0 defeat at QPR.

With West Brom playing Stoke at The Hawthorns on Monday night, Leeds had an opportunity to put pressure on their promotion rivals but instead slipped to a second successive defeat.

QPR took the lead in the 20th minute when Ebere Eze’s free-kick was deflected into the path of Nahki Wells, who converted his fifth goal in three games despite the ball striking his hand.

Patrick Bamford had a penalty saved by Liam Kelly after he was upended by the QPR goalkeeper just past the hour, before Pablo Hernandez struck the outside of the post from a free-kick.

Leeds, who have now won just one of their last seven league games, finished the match with 10 men when Kalvin Phillips (88) was shown a straight red card for a poor tackle on Geoff Cameron.

Brentford were held to a goalless draw at lowly Huddersfield where a win would have lifted them above west London rivals Fulham – who beat Middlesbrough 1-0 on Friday night – into third.

Josh Dasilva came close to a late winner but saw his effort hit a post.

Swansea came from behind to beat relegation-threatened Wigan 2-1 at the Liberty Stadium.

Nathan Byrne put second-bottom Wigan ahead but Rhian Brewster – on loan from Liverpool – struck his first goal for Swansea with an equaliser three minutes later.

Andre Ayew then netted the winner in the second half as Swansea climbed into fifth.

Ten-man Sheffield Wednesday failed to build on their 2-0 win at Leeds as they suffered a 5-0 defeat to Blackburn at Hillsborough. Lewis Holtby put Rovers in front before the Owls had Massimo Luongo sent off shortly afterwards.

Things went from bad to worse when Cameron Dawson tipped Lewis Travis’ effort onto the post, only for the ball to hit the Owls ‘keeper and go into the net.

Holtby added a third on the stroke of half-time while Darragh Lenihan and Sam Gallagher struck in the second half as Rovers won for the first time in six league games with Wednesday suffering a fourth loss in five.

Second-half goals from Matt Smith and Jon Dadi Bodvarsson earned Millwall a 2-0 win over Reading in a game which was marred by an incident of homophobic chanting at The Den.

Smith’s powerful strike gave Millwall the lead before Bodvarsson came off the bench to secure all three points, continuing the Lions’ superb form under Gary Rowett.

But the result will be overshadowed by the off-field incident which saw referee Keith Stroud stop play during the first half. Stroud was called over by his assistant in front of the East Stand to report homophobic chanting from sections of the home support.

Niclas Eliasson netted an 87th minute winner as Bristol City beat Barnsley 1-0 at Ashton Gate which, like Millwall, leaves the Robins outside of the top six on goal difference.

Preston are a point further behind as they also came from behind to beat Charlton 2-1 at Deepdale.

Andre Green, who began the season on loan at Preston, handed Charlton an early lead but Josh Harrop levelled before Patrick Bauer struck the winner early in the second half.