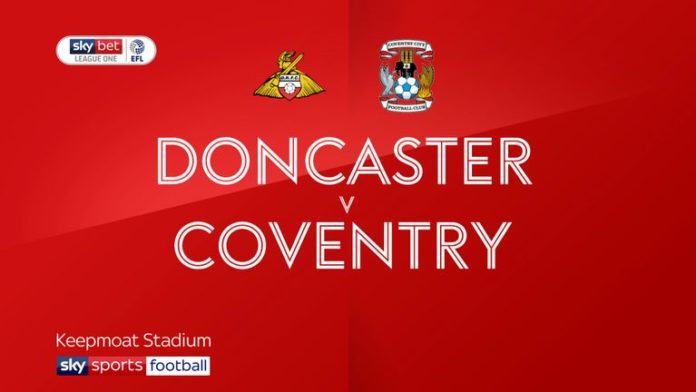 Coventry continued their fine form to remain in touching distance of Sky Bet League One’s automatic promotion places with a 1-0 win at Doncaster.

Jordan Shipley’s fine first-half strike proved enough for the Sky Blues to take the win which extended their excellent run to just one defeat in their last 13 matches. It also brought to an end to Doncaster’s three-match winning run.

Mark Robins’ Coventry side started the brighter and flooded forward with menace. Sam McCallum fired narrowly over the crossbar first time after running onto a loose ball.

Coventry took the lead after 26 minutes when Shipley found space 25 yards out and drilled an unstoppable effort into the bottom corner.

Doncaster struggled to break down the well-organised visitors, who broke forward regularly and dangerously on the counter.

Rovers’ first real effort on goal saw a Reece James shot deflected wide. But the hosts improved after the break and mounted much greater threat.

Jon Taylor and substitute Rakish Bingham both drew saves from Marko Marosi but Rovers could not find the equaliser as Coventry remain three points adrift of second-placed Wycombe.