Home Sport Aluko: I wanted to go out on top 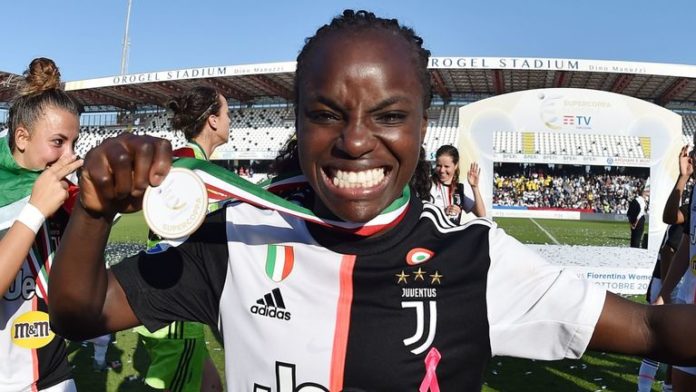 “It was a crossroad decision and definitely a mental one rather than a physical one, I can still play,” says Aluko

Eniola Aluko says she made the decision to retire from professional football because she wanted to ensure she went out on top.

The 32-year-old, who won 102 caps for the Lionesses, left Juventus in December after nearly 18 months with the Serie A champions.

Aluko wrote a letter thanking football for the “crazy, unbelievable journey” it has taken her on during her career, which began in 2001 when she scored on her Birmingham debut as a 14-year-old.

Speaking to Sky Sports News, she explained how her decision to retire relatively early was based on her success with Juventus and her plans for 2020.

“There are a lot of reasons but the main one is that I always wanted to retire while on top.

“It’s a decision that has sat in my head for about six months. When I won my last trophy with Juventus in October, the Super Coppa, it was kind of like mission accomplished in Italy.

“There was a lot going on off the pitch for 2020 which I thought will set me up for five, 10 years. At 32, in this stage of my career, I was unlikely to get a three or four-year contract in football.

“It was a crossroad decision and definitely a mental one rather than a physical one, I can still play. I can look back at my career and say I did a lot.”

Aluko’s career has spanned across two decades during which she has been a pioneer in growing the women’s game to the stage which it is at today.

On the pitch she may be best remembered for her starring role in Chelsea’s double-winning side of 2015 or FA Cup final winning goal as a teenager for Charlton.

When asked to recall the highlights of her career, Aluko said: “The domestic side, the every-day stuff, the training to win trophies, to do it with your mates is even better. 2015 with Chelsea was definitely a highlight, to win the double, winning for the first time at Wembley is something that is etched in all our memories. Some of those girls are best mates of mine.

“Winning the FA Cup with Charlton in 2005, I scored the winning goal, I was only 18 at the time. If you fast forward to 2012, playing in the Olympics. There’s a lot to choose from.

“I’m a bit of a traveller as well so it was important for me to do that before I finished my career. Go and live somewhere else, learn a new language and a new culture and eat lots of nice Italian food.

“It’s an experience that you can only win from. Hopefully it will help me understand international players more when I move onto my next role.”

Aluko has played a significant part in raising the awareness around racism in the sport during her career.

The FA “sincerely apologised” to her, as well as fellow female footballer Drew Spence, in 2018 after evidence found the two players were subjected to “discriminatory remarks on the grounds of race” by the former Lionesses manager Mark Sampson.

She has since said she has moved on from the “stressful, negative period” but her public battle set a new precedent for players to speak out against prejudice. She is now calling for organising bodies and associations to stop ‘talking’ about the problem and start taking action.

“I think Raheem Sterling has been a real voice for change in the game, calling out these incidents, she said.

“Do I think things are worse now? No. I think these incidents happened 20 or 30 years ago and nothing was really done about it. At least now there is a conversation. It should not be happening in 2020 but racism is part of society.

“What annoys me and needs to improve is the governing bodies, the associations really clamping down on the punishments when it does happen. We are having too much of the conversation and it is getting tedious, what needs to happen is the action. Points deductions, fans getting banned – that kind of stuff needs to become consistent rather than just keep talking about it.”