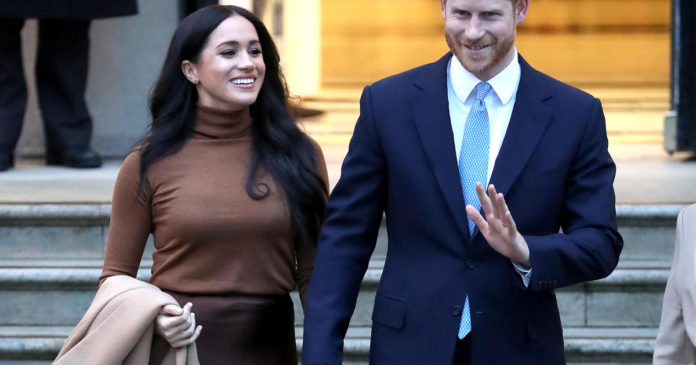 Prince Harry and Meghan Markle will no longer be official “working members” of the royal family, according to a statement released by Queen Elizabeth II and Buckingham Palace on Saturday. Under the new agreement, the couple will no longer receive public funds for Royal duties.

“As agreed in this new arrangement, they understand that they are required to step back from Royal duties, including official military appointments,” the Buckingham Palace statement said.

“The Sussexes will not use their HRH (His/Her Royal Highness) titles as they are no longer working members of the Royal Family,” the palace said. Harry will still be Prince Harry, and the Duke of Sussex as Meghan will remain Duchess, explains CBS News correspondent Imtiaz Tyab, but they will no longer be able to formally represent the queen.

The monarch said in a personal statement attached to the Palace’s announcement that “Harry, Meghan and Archie will always be much loved members of my family.”

“I recognise the challenges they have experienced as a result of intense scrutiny over the last two years and support their wish for a more independent life,” the queen said. “I want to thank them for all their dedicated work across this country, the Commonwealth and beyond, and am particularly proud of how Meghan has so quickly become one of the family.”

CBS News’ Tyab noted that one thing the statement did not lay out was how security would be provided for the royal couple in their new lives.

The couple made the bombshell announcement last week that they would be stepping away from their royal duties, and would work toward becoming financially independent. As part of that transition, the couple also said they would be splitting their time between the United Kingdom and North America.

“This geographic balance will enable us to raise our son with an appreciation for the royal tradition into which he was born, while also providing our family with the space to focus on the next chapter, including the launch of our new charitable entity,” they said in the statement.

After the announcement, Meghan swiftly returned to Canada — where she, Harry, and their young son Archie had recently been staying — leading to widespread speculation that the country would soon become the family’s new home. Harry remained in the UK.

Queen Elizabeth II soon called an emergency royal family meeting. Harry, his brother William, and father Prince Charles gathered at the queen’s home in eastern England. The monarch and the senior members of her family are said to have hashed out Harry and Meghan’s role going forward, including who’s to pay for their transatlantic lifestyle.

Issues at hand included what kind of security the couple will be given while abroad — something that, until now has been paid for by British taxpayers — and what would become of the couple’s U.K. residence, Frogmore Cottage.

The Saturday statement from the palace did not address security, but did say that Harry and Meghan plan to keep the cottage, which underwent a controversial $3 million taxpayer-funded renovation last year. The announcement said the couple had decided to pay that money back to the British government.

“The Duke and Duchess of Sussex have shared their wish to repay Sovereign Grant expenditure for the refurbishment of Frogmore Cottage, which will remain their U.K. family home,” the palace statement said.

After the unprecedented family meeting, the queen said she and the royal family were “entirely supportive of Harry and Meghan’s desire to create a new life as a young family” and “understand their wish to live a more independent life.”

But she added, “we would have preferred them to remain full-time working Members of the Royal Family.”

Harry tells Oprah he feared ‘history repeating itself’ in reference to...