Home Sport Bess: It’s been a hell of a ride 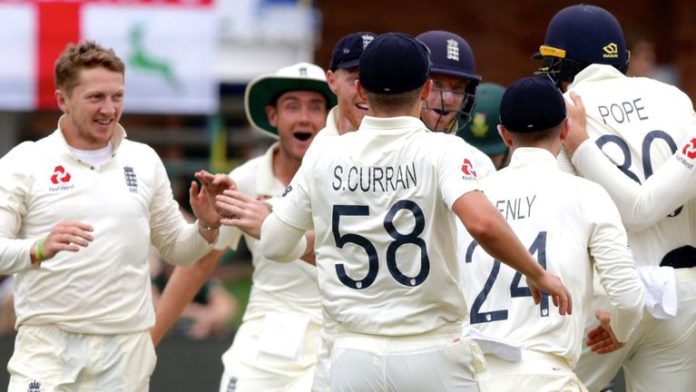 Watch day four of the third Test between England and South Africa live on Sky Sports Cricket from 7.30am on Sunday

Dom Bess says he is enjoying a “hell of a ride” after taking his first five-wicket haul in Test cricket on day three in Port Elizabeth.

The England off-spinner was not even part of the initial squad to tour South Africa and was called up as cover for Jack Leach, who was suffering with illness and has since returned home.

However, Bess leapfrogged Matt Parkinson to play in the second Test in Cape Town and kept his place at St George’s Park, justifying his inclusion by taking the first five wickets in the South Africa innings.

“It was awesome,” he told Sky Sports. “I love bowling so, for me, to have that responsibility and then to back it up is very important because it just gives me more confidence.

“I’m quite an optimistic bloke anyway so to get them under my belt, well there is four more out there so I’m hunting for them!”

It caps a remarkable turnaround for the 22-year-old, who was handed his Test debut against Pakistan at Lord’s in 2018 but was dropped after the two-match series and, with Leach ahead of him in the pecking order at Somerset, found himself playing second XI just a few months later.

“Yeah, it was [tough],” Bess added. “I was very fortunate to have good people around me. I spoke a lot to Tres (Marcus Trescothick), he was in at short leg getting battered! People like that really helped me, Jason Kerr, Andy Hurry.

“It was a tough time and the big thing I learnt was about my ego. I think Tres said to me, ‘you can’t have an ego because in professional sport you’ll play first XI, you’ll play second XI and internationally and you’ll never know when it’ll come around’, it’s just that journey and that has helped me in the long run for sure.

“I know having gone from making my Test debut at Lord’s at 20 to then going to Taunton Vale in front of a man and his dog, was really tough. Just being back in this environment makes me want it more which I think is key.

“You never know what is going to happen at Somerset this year, if that comes about again then just bite my tongue and get on with it because a day like this could still happen again.

“It’s been a hell of a ride. It’s been really good. Obviously there have been ups and downs. At Somerset, not playing, there is frustration there but with that at times it just means I’ve got to bite my tongue and get on with it, just keep bowling, keep working for times like these really.

“It’s been up and down but these last six weeks have been unbelievable. I’m very fortunate that England and Somerset do back me and allow me to go out to places like Yorkshire in Division One, different conditions there, probably the complete opposite to Taunton.

“But again, that is a learning curve for me and I think it really helped in Cape Town, trying to control the rate, trying to pick up the wickets but really contain. Here where it has started to spin then I can really attack.”

Bess was quick to credit the work of Gloucestershire coach Richard Dawson and former Sri Lanka spinner Rangana Herath at an ECB training camp in India before Christmas for the improvement in his game and Graham Gooch thinks there is plenty more to come from him.

“You’ve got to realise, Dominic Bess is 22 years of age, he’s probably got five or six years of development yet in his skills,” he told The Cricket Debate, on a show you can listen to by downloading here.

“Bess is bowling really well for England at the moment, he’s being allowed to bowl a little bit but he has done a brilliant job.

“It’s great to see young players doing well for England, but he’s got a long way to develop yet and, by the looks of it, he’s got a good temperament, a good work ethic and he will get better and better.”

Watch live coverage from day four of the third Test in Port Elizabeth, live on Sky Sports Cricket from 7.30am on Sunday.