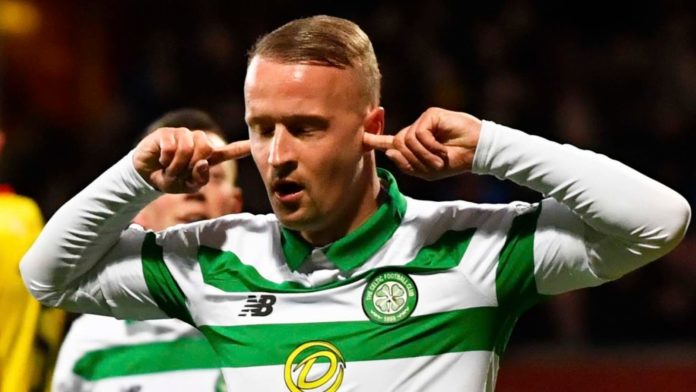 Callum McGregor also on target as Hoops ease into last 16

The 29-year-old striker, back in the starting line-up on Saturday evening for the first time since a Europa League dead rubber in Cluj last month, pounced in the 12th minute.

Despite the Jags being on the back foot for most of the first half, veteran striker Kenny Miller had a couple of chances to equalise for the Scottish Championship side.

Ian McCall’s side fought to remain in the game after the break but Parkhead midfielder Callum McGregor made it 2-0 with a drive in the 78th minute.

In added time, referee Alan Muir awarded a penalty to Partick when Celtic defender Jeremie Frimpong was judged to have fouled substitute Dario Zanatta as he set to slip the ball into an empty net.

Stuart Bannigan converted from the spot but it was too late as the champions won their 32nd domestic cup game in a row.

In Celtic’s first game since returning from warm-weather training in Dubai, Neil Lennon mixed and matched his squad.

Greg Taylor, Nir Bitton and Tom Rogic were handed rare starts as was Griffiths, bedevilled by personal problems and injury this season, who teamed up with Odsonne Edouard in a two-pronged attack.

Fit-again duo Jozo Simunovic and Daniel Arzani – out since October 2018 after being injured on his debut at Dundee – and Poland Under-21 striker Patryk Klimala, who signed on a four-and-a-half-year deal from Jagiellonia Bialystok, started on the bench.

Lennon was forced into a change after just seven minutes when Bitton sustained an injury tackling Rudden, with Simunovic called into action for the first time since August after recovering from a knee problem.

However, Celtic looked in no mood to be put off their stride and when Jags defender James Penrice’s intervention from an Edouard pass saw the ball land at the feet of Griffiths, he steered the ball past Thistle keeper Scott Fox from 10 yards.

Celtic were in control and in the 35th minute, Edouard narrowly missed the target with a 30-yard free-kick. Moments later, Miller broke free of the Hoops defence momentarily but his attempted lob from outside the box was not executed well enough to bother Fraser Forster too much.

Just before the break, there was a Celtic penalty claim when Frimpong went down in the box under pressure from Penrice but Muir pointed for a goal kick to the anger of the travelling support.

Thistle came close to levelling seconds before the break when skipper Scott Brown and Simunovic got in a tangle, leaving Rudden racing down the right but when his cross came to the back post, the stretching Miller’s shot crashed off the woodwork.

Fox saved Christopher Jullien’s header from a Griffiths corner as Celtic began the second half with renewed purpose.

McGregor’s left-footed shot from 25 yards flew just past the post on the hour-mark and Edouard had a deflected shot clip the top of the crossbar for a corner.

That came before McGregor’s deflected drive from outside the area beat Fox and settled the tie. Klimala replaced Griffiths to make his debut and Arzani came on for Rogic before Bannigan scored his late penalty, but the Parkhead side were safely into the next round.