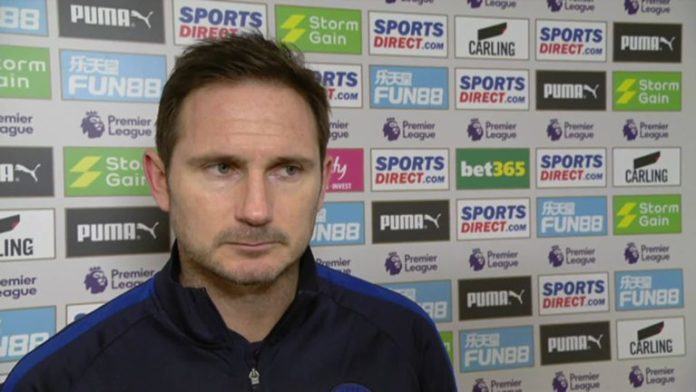 Frank Lampard was left frustrated by a “sucker punch” as Chelsea suffered a stoppage-time defeat to Newcastle at St James’ Park.

Isaac Hayden’s 94th-minute header broke the deadlock to secure three points for Steve Bruce’s side against the run of play in a game that Chelsea had dominated.

“At 0-0 I was going to say to them that they gave everything because they pushed and pushed,” Lampard told Sky Sports.

“It’s football so you have to get your head around it very quickly. I am not a big one for stats but the feel of the game was domination.

“They had three headers in the game and one of them they scored with. Other than that, in the second half I don’t really remember them endangering our box.

“We camped around their box, created chances. You won’t always create clear-cut chances against Newcastle because they have so many bodies back behind the ball and fair play to them because they defend with everything.

“We know we have problems at the top end of the pitch because we don’t get enough front-line goals if we want to bridge the gap. That’s something we have seen a lot this season at home and today was like a home game.

“If you don’t score you are always liable for a sucker punch and we got it.”

Newcastle had a number of players returning from injury but they still had to overcome the early loss of Jetro Willems to a knee problem, with Matt Ritchie replacing him.

The Scotland international was thrilled afterwards.

“I thought we played really well,” Ritchie told Sky Sports. “We restricted them to not many chances and Isaac popped up at the back post late on which was brilliant.”

Hayden, who had been switched to right wing-back in the closing stages, was not even supposed to be in the penalty box to score the winning goal but there was a late change of plan.

“I was on a yellow card so if I needed to foul them [on the counter-attack] I couldn’t foul them, so I got in the box and luckily I got on the end of it,” he told Sky Sports.

While Chelsea were always going to stay in fourth regardless of the result, the victory lifts Newcastle above Southampton and level on points with Arsenal and Everton in mid-table.

Bruce was thrilled with the win – his team’s first in the Premier League since before Christmas.

“They worked so hard,” he told Sky Sports.

“Talk about smash and grab or whatever you want to call it but the one thing we did do, you can’t fault them, was we defend really well.

“Of course, we have nicked it and sneaked it or whatever you want to call it but when you are playing against the big boys…

“Yes, we have to take care of the ball better for sure but you can’t fault them to a man with their effort and endeavour.”