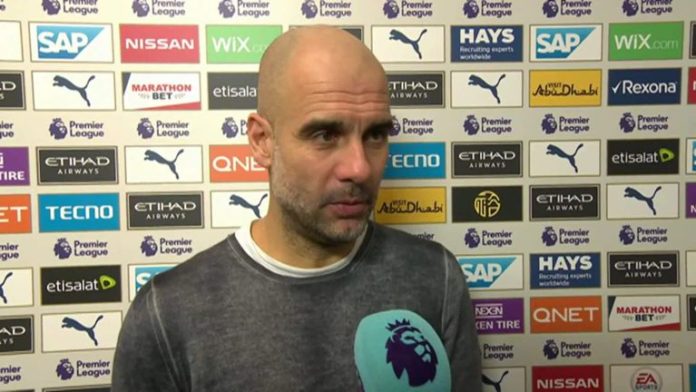 Pep Guardiola rued a ‘wrong decision’ in defence as Manchester City dropped points in a 2-2 draw with Crystal Palace.

After falling behind in the first half, City looked to have turned the game around with two goals in the final 10 minutes from Sergio Aguero.

However, Palace snatched a point when Wilfried Zaha forced a Fernandinho own goal in the 90th minute.

City have now conceded 10 more goals than they had at this stage in the league last season, and Guardiola said: “At 2-1 it’s just not allowed that Zaha runs. It’s simple but we allowed them and after we conceded the goal.

“It was a decision. The concentration is always there, it was a wrong decision. We’re going to solve it and improve it. In that position we have to have the back four there and not let them run. It’s simple. In this situation we cannot let them run.”

The draw is another blow to City’s faint title hopes as it leaves them 13 points behind leaders Liverpool, who have two games in hand, including a clash with Manchester United on Super Sunday.

“We did everything,” said Guardiola, whose side had 72 per cent of the possession and 25 shots compared to five from Palace.

“We start really well, we arrived I don’t know how many times in the box, so we did it, we did everything to try to win the game. And unfortunately we could not win.

“Last season when they beat us here was the same. They had few shots on target but scored and this was the same.

“Maybe at Selhurst Park they have to try to impose themselves a bit more but it’s always quite similar. In general all games we play against them we control it but the second goal is a mistake we have done and we have to avoid it.”

Asked about City’s title ambitions, Guardiola added: “We have to still try to continue. The season still has a lot of games to play, and you have to try to secure the place for the Champions League next season.

“Now we recover for two or three days, go to Sheffield [United], play there and after the FA Cup, semi-final of the Carabao again, so we try to secure that position.”

City now go to Sheffield United on Tuesday night at 7.30pm, before hosting Fulham in the FA Cup fourth round at 1pm on Sunday. Palace host Southampton on Tuesday evening in the Premier League.