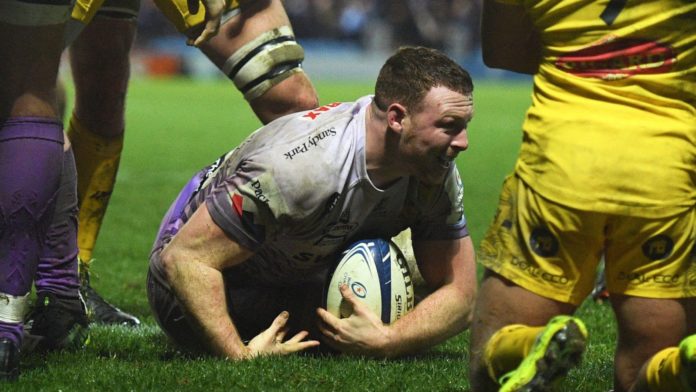 The sides were level at 14-14 at half-time, but No 8 Simmonds’ two scores after the break set Exeter on course for victory and sealed the tryscoring bonus point in the process.

It means the Chiefs will have a home tie to look forward to in the last eight, while at the same time ending any lingering hopes La Rochelle had of sneaking through to the knockout stages.

La Rochelle claimed an early touchdown by wing Kini Murimurivalu, which Ihaia West converted, while they were also awarded a penalty try.

But the Chiefs were unstoppable in the second half, scoring 19 unanswered points to march into the quarter-finals.

La Rochelle, beaten at home by Rob Baxter’s men in November, suffered an early blow when their captain Romain Sazy went off injured and was replaced by Thomas Levault.

It was a disruptive opening to the game, and both sides struggled to settle as knock-ons and poor passing hampered progress, with much of the action revolving around halfway.

But Exeter struck from their first attack, punishing La Rochelle after a trademark close-range lineout drive, with Luke Cowan-Dickie touching down and Joe Simmonds converting for a seven-point lead.

La Rochelle were only behind for four minutes, though, responding impressively by attacking from a scrum and sending the powerful Murimurivalu over as he brushed aside three Exeter defenders.

West’s conversion levelled the scores, yet the home side hit back as more impressive work by their pack ended with Dave Ewers scoring and fly-half Simmonds converting.

But La Rochelle were undaunted by the task in front of them, and they drew level again in the 24th minute after new Scotland captain Stuart Hogg was sin-binned for a deliberate knock-on.

The game remained a relatively even contest in terms of territory, yet the Chiefs were denied a third try on the stroke of half-time, with Joe Simmonds seeing his effort disallowed following obstruction by his team-mate Ian Whitten on West.

Exeter regained the lead after 47 minutes when Sam Simmonds proved unstoppable from just five metres out, and his brother’s successful conversion made it 21-14.

The Chiefs were now in the ascendancy, and La Rochelle could not escape from their own 22 as Exeter cranked up the pressure through their forwards.

And the bonus-point try arrived when Exeter shunted the La Rochelle pack backwards in a scrum, and Simmonds claimed his second try.

La Rochelle fell further behind in the 62nd minute as the hosts stunned them through a flowing 70-metre move.

Man-of-the-match Cowan-Dickie and Sam Simmonds set the ball rolling before replacement centre Ollie Devoto made the telling contribution with a scything break, and Townsend took his scoring pass to finish things off.

The result could set up a last-eight grudge match against holders Saracens later this season, depending on results in Sunday’s final pool stage flurries.