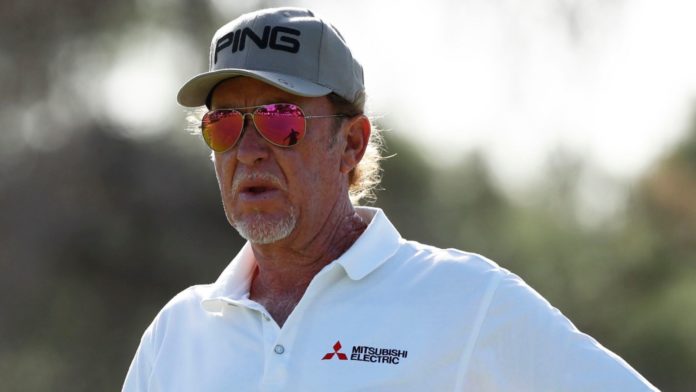 Ernie Els narrowly missed out on a debut victory on the PGA Tour Champions after losing out in a play-off at the season-opening Mitsubishi Electric Championship.

The four-time major champion, who turned 50 in October, posted a bogey-free 65 at Hualalai Golf Course to finish in a three-way tie alongside Miguel Angel Jimenez and Fred Couples on 14 under.

Couples was eliminated after missing his par putt at the first extra hole, as Jimenez rolled in a 12-foot birdie on the second play-off hole to snatch victory and claim a ninth seniors title.

“Disappointing, obviously,” Els said. “I would have loved to got it through, but I had a couple of chances, didn’t quite get the right speed or the right line, but all good. Congrats to Miguel.”

Els had been eight strokes off the pace after the opening round of the 54-hole event but surged up the leaderboard over the final two days, mixing five birdies with an eagle in windy conditions on Saturday.

Couples and Jimenez both posted matching 67s on the final day, while a round-of-the-day 64 from Retief Goosen lifted the South African into tied-fourth on 12 under with Wes Short Jr.

Bernhard Langer – a three-time winner of the event – had been in a share of the lead with Els, Couples and Jimenez with two holes to play, only to double-bogey the 17th and drop another shot at the last to end in a share of sixth spot.

Paul Broadhurst led the British challenge and finished alongside Langer on 11 under, while Colin Montgomerie ended the week in tied-15th and six off the pace after a final-round 67.