Home Sport Four wickets for one run: How SA crumbled 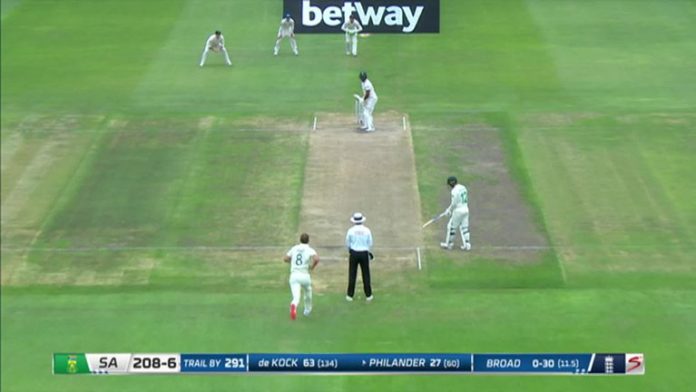 Proteas collapse to 209 all out as England enforce follow-on

South Africa crumbled to 209 all out against England in the third Test after losing four wickets for one run in 25 minutes on the fourth morning in Port Elizabeth.

Stuart Broad bowled Vernon Philander (27) in the first over after the Proteas resumed on 208-6 – 92 runs shy of avoiding the follow-on – before Sam Curran castled Quinton de Kock (63) five balls later.

Quinton de Kock has been bowled in seven of his last 13 Test innings. #SAvEng

Broad then cleaned up Keshav Maharaj (0) when the tailender hacked onto his leg stump and, after one wicketless over from Curran, Broad (3-30) had Kagiso Rabada (1) caught at mid-off by Mark Wood.

England captain Joe Root had no hesitation in enforcing the follow-on after Rabada – who had scored the only run of the morning, off Curran to long leg – chipped to Wood to leave the hosts 290 runs behind after first innings.

England enforced the follow-on in an away Test for the first time since Wellington 2013 against New Zealand – but they have not won an overseas Test after enforcing the follow-on since 1992, against the Kiwis in Christchurch.

WICKET! Philander b Broad 27 – SA 208-7
What a start for England! They take the new ball and Broad strikes with the final ball of the first over, finding a touch of movement back in to Philander, who is clean bowled.

WICKET! De Kock b Curran 63 – SA 208-8
And another! Stumps sent flying again, and it’s Curran this time, with the key wicket of De Kock too. What a start!

WICKET! Maharaj b Broad 0 – SA 208-9
A hat-trick! Not the type South African would want… Philander loses his off stump, De Kock his middle and now Maharaj’s leg stump is uprooted. England have three wickets for zip in less than three overs!

WICKET! Rabada c Wood b Broad 1 – SA 209 all out
That’s your lot, folks. A simple chip from Rabada to mid-off finishes things off. South Africa lose their final four wickets for one run… surely, England will enforce the follow-on.