Home Culture Mumford & Sons on playing with a “sense of abandon” 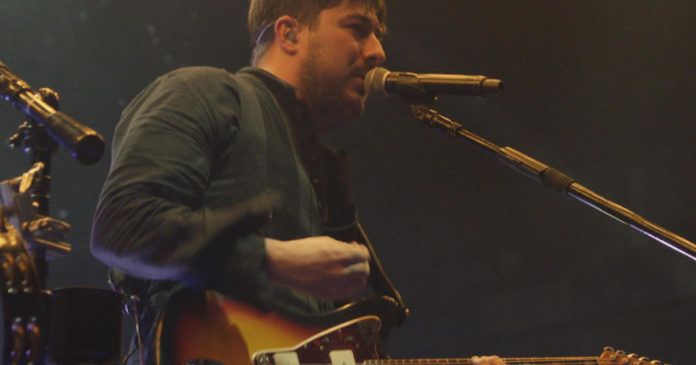 Mumford & Sons are one of music’s most unlikely success stories. The British group broke through with a banjo-driven folk/rock sound that Rolling Stone called, “like a horse and buggy designed in a Tesla factory.”

With the recent release of “Delta,” their third straight #1 album, they are indisputably among the biggest bands of the past decade.

Winston Marshall and Marcus Mumford are one-half of Mumford & Sons; Ted Dwane and Ben Lovett the other.

“CBS This Morning” co-host Anthony Mason asked, “Were you surprised at how big your success was?”

“I thought he was gonna go, ‘Not at all!'” laughed Mumford.

When asked why the group worked so well together, Dwane said, “There’s absolutely no explaining it. We’ve tried.”

The quartet became acquainted through the London music scene: “We were the band rejects to start with,” said Mumford. “Ted and I both got fired from the same band on the same day after one gig.”

Why? “I think we took too much attention away from the lead singer! And he was an attention-seeker. I mean, he was taking all his clothes off on stage and literally climbing the rigging.”

“So, what were you doing to compete with that?” asked Mason.

“Playing quite well. He didn’t like it!” Mumford laughed.

In 2007, the four found each other, when Mumford, who’d written some songs, wanted to put a band together to play them. They began rehearsing in a London studio, under a train line, near the Putney tube station. “Who puts a studio under a train?” Mason asked.

“It’s the cheapest real estate you can get,” Mumford said. “You’ll hear it, don’t worry!”

It was there the band found its sound: “Singing together for the first time, I remember that vividly. I remember it sounding better than I thought it would.”

Their debut album, “Sigh No More,” released in 2009, would sell more than eight million copies worldwide.

The band lived upstairs in the building where the album cover was shot; Winston Marshall’s mother owned the antique shop downstairs.

Dwane said, “I remember poor old Max Snow with his Hasselblad, stood exactly in the middle of the road, to see the best way to frame it, it’s just cars going through … it’s fantastic.”

Marshall said the name of the group was born out of the antique store, where they worked for a bit. “Yeah, I guess we felt like we wanted it to feel like a family business, ’cause that’s sort of what it felt like,” Mumford said. “I sometimes wish my name wasn’t in it. We thought about changing it a few times.”

To what? “Marshall & Sons?” Marshall suggested.

Marshall and Mumford also had both been inspired as teenagers by the soundtrack to the 2000 film, “O Brother, Where Art Thou?”

Marshall said, “I think it was the power of the film, because it brought that mountain music to London city boys who never would have been exposed to that. It made it really cool. Like, it’s a cool film.”

“It glamorized it,” Mumford added.

In 2011, an appearance on the Grammys with Bob Dylan brought them more attention in America:

Two years later, they were back at the Grammys, when their second record, “Babel,” won Album of the Year.

Critics, though, were less impressed. “Why do people hate Mumford & Sons so much?” one British music magazine asked.

The band was accused of “playing dress up” with their old-timey attire and instruments – a charge they even parodied in one of their own videos:

Mason asked, “Did any of that get under your skin?”

“The authenticity thing got under my skin a little bit,” Mumford said. “We definitely don’t expect – or even desire – to be liked by everyone. That was frustrating to me, ’cause I thought it was narrow-minded.”

Mason asked, “How serious was that?”

“Is there a not-serious version of that?” Lovett replied.

“It’s only been in the last year I’ve actually sort of really thought about it,” said Dwane. “That was brutal.”

“What exactly were you feeling?”

“It just felt like someone hit me in the head with a baseball bat. And I was dizzy, and my vision was gone.”

While on tour, a blood vessel in Dwane’s brain had burst. But somehow, he played for days before being diagnosed.

Mason asked, “What did you think when they told you what you had?”

“I was so relieved,” Dwane replied.

“That you knew what it was?”

“Yeah. Our tour manager came out, and he put his arm around me and was like, ‘You’re gonna have to have brain surgery in the morning.’ And I was like, ‘Sweet!’ Just make it go away,'” he laughed. “It was the most incredible pain, and sure enough I woke up the next morning and felt much better.

Less than three weeks after that close call, the group headlined the Glastonbury Festival in England.

Lovett said, “The reaction when Marcus said, ‘Ted’s alive’ on stage with 100,000 people standing in front of us, the wave of emotion that came over everyone. I can’t imagine what it was like for you.”

Mumford & Sons perform “Babel” at the Glastonbury Festival in 2013:

They play arenas now, like London’s O2. “Your shows must be so much bigger than they were in the beginning,” Mason said.

“Yeah, I know. But it’s funny, the way we look at each other on stage, that hasn’t really changed,’ Lovett said.

And they’re still chasing the excitement of a sold-out show. “I can tell you the ones that didn’t sell out,” Mumford said. “And those frustrate me. ‘Cause we wanna sell shows out. We just love playing live.”

“So, do you ask before a show whether you’re sold out?” asked Mason.

That’s when Marcus Mumford, the son of a minister, becomes evangelical: “So, there’s some sense of abandon that we get to be at the heart of, which is an extraordinary thing. When you get 18,000 people, it’s an amazing feeling. It’s a miracle, effectively. It’s the power of congregation, you know? That’s cool!”

You can stream the Mumford & Sons album “Delta” by clicking on the embed below (Free Spotify registration required to hear the tracks in full):