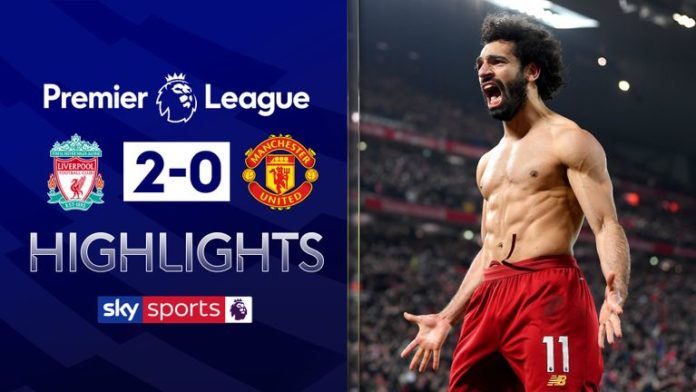 Virgil van Dijk’s header helped Liverpool on their way to a 2-0 win over Manchester United at Anfield as they extended their lead at the top to 16 points.

Jurgen Klopp’s side had two further goals ruled out before the interval and upped the intensity again in the second half before Mohamed Salah’s goal added gloss to the win late on.

The failure to find the second goal until stoppage time made for a nervy finale and United had their moments in the second half with Anthony Martial going close, but there was to be no equaliser.

United do remain the only team to take points off Liverpool this season but – without the injured Marcus Rashford – there was to be no repeat here for Ole Gunnar Solskjaer’s side.

Man of the match: Jordan Henderson.

United had made a promising start too but their early endeavour was soon undermined when they conceded from a corner for the eighth time in the Premier League this season.

How Liverpool won it

Trent Alexander-Arnold’s delivery from the right found the head of Van Dijk, who had the run on Brandon Williams and Harry Maguire to power the ball beyond David de Gea.

The clash between goalscorer and goalkeeper was reprised amid some controversy midway through the first half when Liverpool thought they had doubled their advantaged.

De Gea went up for a high ball after Salah had misdirected his shot, but the United goalkeeper dropped the ball inside the six-yard box under pressure from Van Dijk.

Sadio Mane gathered possession and fed Roberto Firmino, who curled the ball beautifully into the corner only for a VAR review to disallow it for Van Dijk’s robust challenge.

By this point, United’s flow of counter-attacks were beginning to dry up as the Anfield crowd pushed their team on and the Liverpool advances began to overwhelm the away side.

Georginio Wijnaldum also thought he had found the second goal after latching onto Alex Oxlade-Chamberlain’s measured through-ball but was correctly adjudged to be just offside.

Andreas Pereira almost had United level against the run of play but he was stretching to reach Aaron Wan-Bissaka’s centre and could only divert the ball wide of the post.

At the other end, Mane had a wonderful opportunity to extend Liverpool’s lead but his left-footed effort when racing onto Salah’s pass was kept out by the right boot of De Gea.

Liverpool came out with even greater intent in the second half and Salah should have scored from Robertson’s left-wing cross but could not get the right contact on the ball.

Jordan Henderson then produced a brilliant left-footed shot that was superbly tipped onto the post by De Gea as Liverpool continued to sustain attack after attack.

Ole Gunnar Solskjaer stuck with a back four rather than reverting to the back five that secured a point against Liverpool at Anfield – but with a twist. Brandon Williams was pushed further forwards with Luke Shaw coming in at left-back. The big loss was that of the scorer from that first meeting with Marcus Rashford ruled out due to a back complaint.

There was a warning for Liverpool when Fred fired wide and the big chance for United came when Martial blazed over from a good position just before the hour mark.

With the result in the balance, United pushed hard to level things up with Juan Mata and Mason Greenwood being introduced but the clear-cut opening never arrived.

Instead, it was Salah who had the final say, scoring his first goal against Manchester United after racing onto Alisson’s clearance up the field and slotting the ball beyond De Gea.

United and Solskjaer will take heart in a spirited effort. For Liverpool and Klopp, they will take the win and the points that edge them that little bit closer to that long-awaited Premier League title.

The games keep coming for these two teams. Liverpool are back in Premier League action against Wolves at Molineux on Thursday before facing Shrewsbury away in the FA Cup on Saturday. Their game in hand in the Premier League also comes away from home and will be played on January 29 against West Ham at the London Stadium.

Manchester United also have three more games to play before January is through – in three different competitions. There is home game against Burnley at Old Trafford on Wednesday before an FA Cup fourth round clash against either Tranmere or Watford next weekend. The second leg of the Carabao Cup semi-final against Manchester City is on January 29.