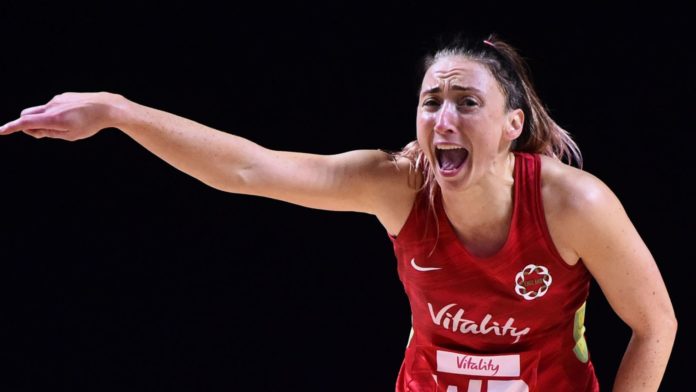 England’s Vitality Roses commenced their Nations Cup campaign with a 64-48 loss to New Zealand at the Motorpoint Arena in Nottingham on Sunday.

New Zealand, the world champions who broke English hearts last year in Liverpool, mixed up their combinations in attack throughout and showed the strength of their shooting options.

At the other end of the court, they also overcame being shorter on numbers after Michaela Sokolich-Beatson was sent home after rupturing her Achilles tendon in a warm-up match.

For the first half, the Roses kept New Zealand in their sights and only trailed by 28-25 at the half-time pause.

From the start, Kate Shimmin was sparky in defence and the introduction of George Fisher settled the Roses’ attack-end and shooting circle.

However, the world champions pushed their foot down on the accelerator in the final two quarters and highlighted just how impressive their player pool is, and how ingrained their style of netball is.

So an easy win for Jamaica in the end, they looked structured, physical and full of flair the kind of Jamaica you fear. As for South Africa they never really got going and lacked creativity
Next up England V NZ. @SkyNetball

In the earlier contest, Jamaica put their Netball World Cup woes behind them and sent a message of intent out to the rest of the world.

Connie Francis’ outfit dominated the SPAR Proteas and their five-goal margin of victory (59-54) didn’t fully reflect their prowess on court.

The competition now moves to Birmingham for the second match-day before the final weekend takes place at the Copper Box Arena in London.

Sky Sports is your home of netball – every moment of the Vitality Nations Cup is being shown on air and streamed on YouTube. The second match-day is on January 22, with England versus South Africa and New Zealand against Jamaica.