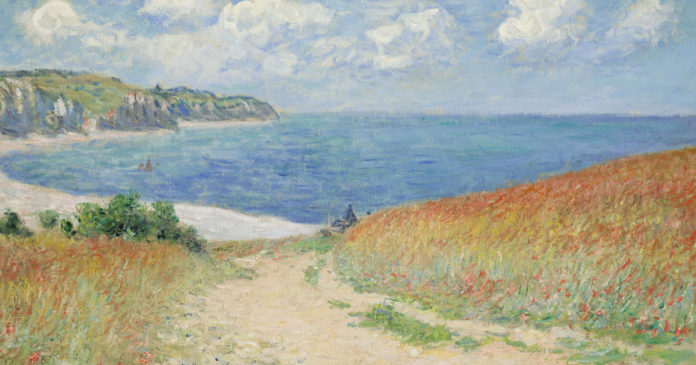 Putting together a Monet exhibit with more than 120 works from 80 lenders in 15 countries is best done by a life-long Monet fan – and Christoph Heinrich qualifies. “It’s like Christmas and every other holiday at the same time,” said the director of the Denver Art Museum, now home to the country’s largest Monet exhibit in more than two decades.

And for those who love Claude Monet, the show is like visiting old friends.

Correspondent Barry Petersen asked, “Monet is a household name, not just in the art world, but in the world. Why do you think that is?”

“Monet is a painter that works on many different levels,” Heinrich said.

Born in Paris in 1840, Monet began drawing caricatures as a teenager, picking up a paint brush not long after. His work was often shaped by events in his life. In 1870, afraid he’d be called up for the Franco-Prussian War, he fled to England, eventually leading to a years-long love affair with, of all thing, the diffuse light of smog.

“He’s waiting for the moment when everybody turns on their stoves, because then the pollution is the highest,” said Heinrich.

Petersen asked, “If you were an art dealer and Monet came to you and said, ‘Hey, I’m gonna go paint a bunch of smog in London,’ you probably would have laughed in his face?”

“I think his art dealers, at one point, tried to tell him what to paint. He couldn’t care less.”

But he cared when his first works (now considered masterpieces) were rejected. Depressed and destitute, he even tried to commit suicide. Death and sadness also affect his painting. In 1879 Camille, his first wife and his muse, died. Then, Heinrich noted, he pretty much stopped painting people: “I think he’s really more interested in what’s happening in the nature, and he’s interested in the light.”

And color … finding it in surprising places, even in the white of snow.

That fascination with light is seen in his series of subjects: the haystacks, the poplars, and of course the waterlilies in his garden. He painted them hundreds of times over three decades. And as he aged, his view of his water lily pond and the Japanese bridge changed.

Some argue that paintings made in the last decade of his life make Monet as influential to modern art as he was to Impressionism.

Curator Gloria Groom of the Art Institute of Chicago, home to its own Monet exhibit opening this spring, described his work as, “Not having any preconceived I’m starting here and ending there, but rather letting the paint itself tell him where he was going – I think that’s a very modern idea.

“These large, immersive, amazing, colorful paintings were very attractive to Helen Frankenthaler, to Ellsworth Kelly,” she said. “These are artists who paint big, who paint gestural. When you think about even abstract expressionism, this idea that you’re not seeing a subject per se but you are seeing something in the paint itself, those are the gifts he gave to the next generations,” she said.

Claude Monet died at age 86 after finding fame and fortune, and both continue to this day. Last May, one of his paintings brought more than $110 million – a record-breaking sale for an Impressionist work.

Henrich said, “He definitely deserves to be recognized as one of the most innovative painters, standing with one leg in the 19th century, but really with the other leg in the modern age.”