Home Culture The mystery of the reappearing Klimt painting 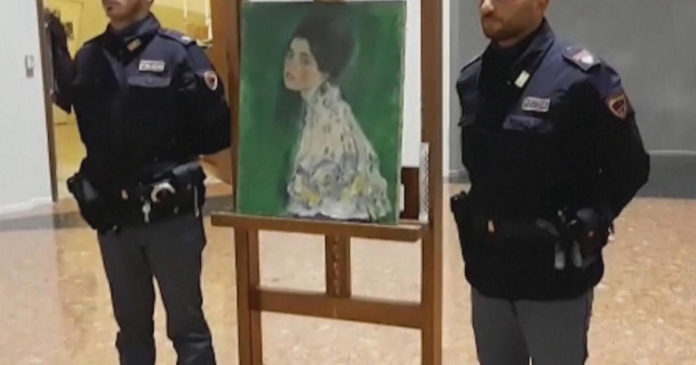 She looks unfazed – not a bit like a woman who’s been missing nearly 23 years. But Italian authorities claimed Friday they’d authenticated the stolen “Portrait of a Lady,” painted by Austrian master Gustav Klimt.

As art mysteries go, how good is this? “Well, it’s stuff upon which mini-series are made, right?” said art historian Liz Lev. She said the decades-long real-life-drama puzzled investigators – and, quite possibly, thieves: “It’s a distinctive Klimt style, so you sort of take it down to the local pawn shop: ‘Hey, I’ve gotta get rid of this.’  Someone’s gonna go, ‘Hmmmmmmm.'”

The portrait was reported missing from an Italian gallery in 1997. Then, this December, police were called to the gallery grounds, after a gardener who’d been clearing ivy discovered a hole in the wall – and, unbelievably, the painting.

“The painting is in very good condition,” Lev told correspondent Seth Doane. “The first thing they check was, ‘Oh my gosh, if that’s been sitting outside in rainy, cold Piacenza for the past 23 years, what condition will it been in?’ But it’s actually in good condition, which indicates that it was probably taken away and then returned.”

Investigators plan to do more tests on this Klimt, which is actually two portraits, one painted on top of another – a uniqueness which helped prove it was the real thing.

Klimt worked mainly in Vienna in the early 1900s. He may be best known for “The Kiss” – and, as Morley Safer noted in 2008, his seductive portraits of socialites:  “They’re slender and elegant creatures,” said Renee Price, director of New York’s Neue Galerie.

“Who happen to have no clothes on,” Safer said.

“Just an accident,” she laughed.

The recovered masterpiece is under lock and key, hidden away with its secrets: How is it in such good shape? And where has it been?