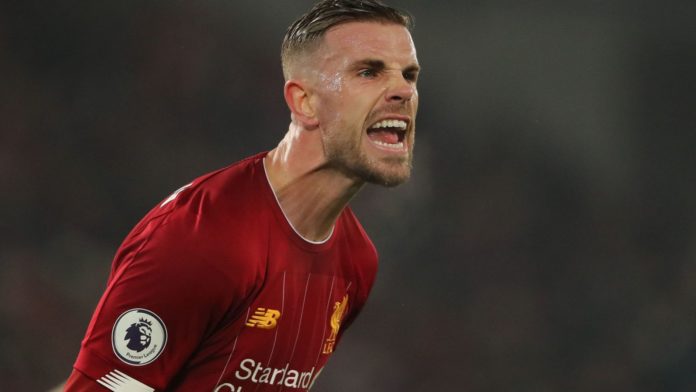 Virgil van Dijk’s header helped Liverpool on their way to a 2-0 win over Manchester United at Anfield but which players impressed and which flopped?

The safest hands in the Premier League. And his feet aren’t bad too. He hasn’t conceded a goal in the division for over 700 minutes. This was his seventh clean sheet in a row and he made the four saves he had to made look very easy – as he always does. Great long-range assist for Mohamed Salah’s late goal too

Grabbed his 10th assist in a season which is getting better with each passing week. Wasn’t severely tested going the other way despite Anthony Martial targeting his area of the pitch.

Came up with the match-winning moment, although Liverpool should have extended their advantage during a dominant spell in the second half. Liverpool have now scored 14 goals this season from set pieces, which is an underrated tool in their armoury. Van Dijk was rarely flustered even when United sensed a late equaliser, making some important headed clearances in injury time.

Ever present for the Reds in their last seven Premier League games, which has coincided with seven straight clean sheets. Much like Van Dijk, he was a rock at the heart of that backline.

Some wasteful early crosses but his performance improved as Aaron Wan-Bissaka tired badly in the second half.

He won the corner that led to the opening goal with a direct break down the right. He showed a couple of moments of quality and his energy was always commendable but he was outshone by his team-mates in midfield.

A performance that had everything you want from a midfielder. He has all the attributes that the United midfield lack – energy, bite, maturity and excellent distribution. So unlucky his goal was ruled out for offside.

Covered more ground than any other Liverpool player and is without question playing the best football of his career. His passing was clever, his aggression unrivalled and like Wijnaldum, he was unlucky not to get on the scoresheet when he was denied by a fine David de Gea save.

Denied by De Gea, too, just before the break in a performance that perhaps failed to hit the heights he’s hit this season. That said, his movement without the ball is a joy to watch, as is his link up with Roberto Firmino.

Unlucky to have his fine strike ruled out by VAR, meaning he’s not scored in 10 appearances against United despite having 28 shots in those meetings. There’s few players more enjoyable to watch than the Brazilian. Silky smooth.

Beaten to the punch by Luke Shaw in the opening periods and was generally quite sloppy with his distribution. However, that will be all forgotten about and rightly so, due to his breakaway late goal that may prove to be an iconic moment in Liverpool’s record breaking season.

Did well when called upon, especially when denying Mane with his feet and Henderson’s long range effort that he flicked onto the post. However, he was fortunate VAR intervened to spare his blushes on Firmino’s disallowed goal after he was bullied out of a high ball by Van Dijk. An incident that drew criticism from Roy Keane in the Sky Sports studio. “There’s a softness to De Gea,” said Keane.

Unusually flat. Failed to get close enough to Robertson, especially in the early stages of the second half where Liverpool ran wild down his flank.

Gary Neville referenced him looking “knackered, tired, leggy” at various points of the second period. Not a performance the usually consistent performer will be proud of.

Hurried by the Liverpool forwards and was constantly required to deal with danger. Stood up to that challenge well at times but Firmino especially had his measure for large periods.

Confirmed as the new Manchester United captain on Friday but failed to produce the authoritative performance that is required to pick up a positive result at Anfield. Neville criticised his part in Van Dijk’s goal, saying: “His starting position has to be better. Once Van Dijk is on the move, Maguire has no chance.”

As Jamie Carragher referenced on co-commentary, Maguire cost £5m more than Van Dijk. If you were pricing them up now, the Dutchman would be worth double the United skipper.

A surprise inclusion after missing the last four games with illness but, for the majority looked sharp and dealt with Salah’s threat, showing good aggression in the tackle. Salah eventually got his measure as the game rolled on.

A quiet first start against Liverpool for the 19-year-old. Sky Sports‘ Graeme Souness pointed out the youngster was at fault for Van Dijk’s opening goal, quoting: “He had his hands on hips when defending the set piece which is never a good sign. He should get closer to Van Dijk and block his run.”

Booked inside 10 minutes for a lazy high boot on Wijnaldum. Supposed to be the experience head in the United midfield but bypassed at will by the relentless forward pressure of Liverpool’s midfield three. Has the air of a man that isn’t enjoying his football.

Offered energy and endeavour in midfield, covering plenty of ground, but that £52m price tag seems to be weighing him down, especially in terms of the quality he produces on the ball in the final third.

Thrust into the false nine position and while he made poor decisions at times and failing to carry the class of a player like Anthony Martial, his endeavour and bite can’t be faulted. Almost slid home an equaliser in the first half but his ‘Gazza Euro 96 moment’ sums up his Manchester United career: the nearly man.

Started brightly but his poor pass execution to Martial on 12 minutes sent Liverpool on their way to win the corner that brought about the opening goal. The potential is there but he’s like a rabbit in the headlights at times and now hasn’t scored in his last 24 appearances.

Not sure his mum will need to wash his kit after this one as he was anonymous for large parts. However, what he lacks in tenacity, he more than makes up for it with his ability to cut in off the left. He’ll be disappointed not to have hit the target with a big opportunity on 59 minutes. He’s a player that continues to frustrate on big occasions such as these.