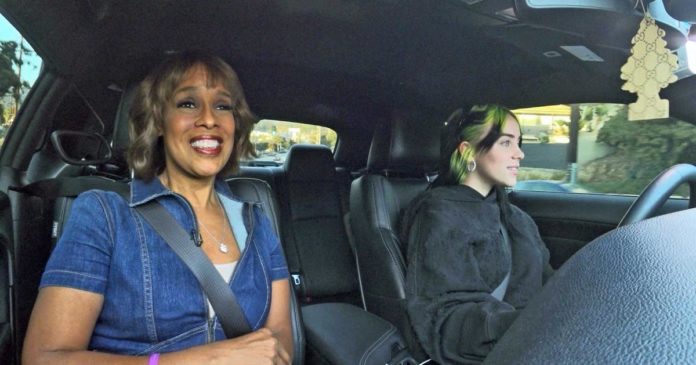 Gayle King, co-host of “CBS This Morning,” paused on a Brooklyn sidewalk to take it all in. King had just wrapped up an exuberant shoot with eight-time Grammy nominee Lizzo.

“May we all have a little Lizzo sauce in our lives, I’ll say that,” King said after the sitdown.

“I am very psyched about the Grammys special. Number one, it’s my first one. So, you always like your first. And number two, I love, love, love music of all kinds,” King said.

In her first primetime Grammy special, King spends time with music’s biggest artists, who in turn open up in intimate, engaging interviews, where they reveal a side of them rarely seen.

“We got to know them,” says King. “Billie Eilish drove me around in her beloved Dodge Challenger. Lizzo took me to her favorite restaurant and Lil Nas X invited me to his new apartment. Country royalty Blake Shelton took me to a record store with the love of his life Gwen Stefani.  And I went to a spa with the Jonas Brothers. Yes. You heard that right.”

“The Gayle King Grammy Special” will air Thursday, January 23 at 10/9c on the CBS Television Network. On Monday, “CBS This Morning” (7-9 a.m.) will have previews of the special. A preview of King’s chat with Lizzo will air on Monday, the Jonas Brothers on Tuesday, Blake Shelton and Gwen Stefani on Wednesday and Billie Eilish on Thursday.

For King, sitting down with some of the top music stars was satisfying on several levels.

“I just enjoy talking to people, period. But it’s always good when you can spend time to people in their own natural habitat, to find out what makes them tick,” King said. “To find out why they do what they do, and why they love it so much. And what you see when you talk to people who are famous, they have the same insecurities, the same dreams, the same hopes that we all do. And it’s just nice to see that side.”