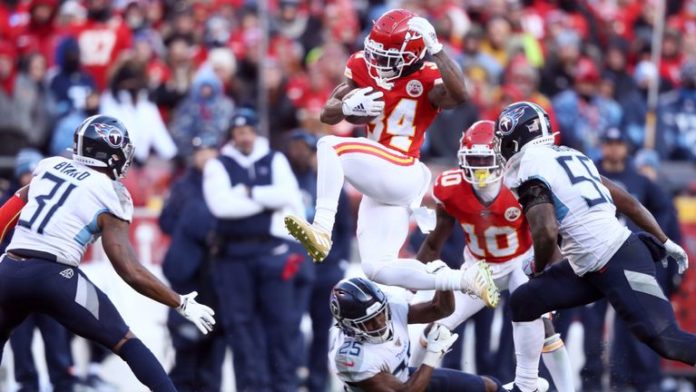 Patrick Mahomes inspired the Kansas City Chiefs to a 35-24 win over the Tennessee Titans as they reached the Super Bowl for the first time in 50 years.

The third-year quarterback finished 23 of 35 passing for 294 yards and three touchdowns, as well as rushing for a team-high 53 yards and another score, helping improve head coach Andy Reid’s Championship game record to 2-5.

Titans running back Derrick Henry was limited to 69 rushing yards for one touchdown having recorded at least 180 in each of his last three games. Quarterback Ryan Tannehill was 21 of 31 for 209 yards and two touchdowns.

The Chiefs were shut out on their opening drive in response after Mahomes was sacked by Kamalei Correa for a two-yard loss.

Tannehill had a scare on his next possession when a pass intended to Corey Davis was broken up by Bashaud Breeland, who came up with the ball claiming the interception. Upon further review of the play the decision was overturned after it became clear the Chiefs cornerback had lost control on his way down.

Tennessee would take full advantage of that break, converting a fourth-and-two and going on to extend their lead with a four-yard touchdown run from Henry on a first-and-goal set up by Tannehill’s 22-yard pass to Jonnu Smith.

The Chiefs hadn’t helped themselves earlier in the drive, giving away back-to-back penalties for a neutral zone infraction and encroachment, respectively.

The hosts hit back immediately when Tyreek Hill collected the handoff from Mahomes before scurrying to the left-side of the endzone for an eight-yard touchdown after Kevin Byard had cost the Titans with a holding penalty.

That capped a drive in which the Chiefs became the first team to convert on fourth down against Mike Vrabel’s side this post-season.

In a bid to keep Mahomes and the Chiefs offense off the field, the Titans launched a 15-play, 75-yard drive lasting over nine minutes that ended with Tannehill throwing a one-yard trick-play pass to right tackle Dennis Kelly.

During that drive the Titans had converted a third-and-22 situation, with Tannehill’s 10-yard pass to Brown combining with a welcomed defensive pass interference call.

Back came Mahomes with a 20-yard laser to Hill who ran into the endzone on a five-play drive to close the deficit to 17-14 after Harrison Butker’s extra point.

What do the Seahawks need?

Jeff Reinebold and Brian Baldinger are predicting a big offseason for the Seattle Seahawks following their Divisional Round elimination in the playoffs.

The Titans were forced to punt on their next drive, before Mahomes produced a moment of magic with an improvised 27-yard touchdown run during which he swerved one diving tackle and rode two more to reach the endzone. In doing so he gave the Chiefs a 21-17 lead at the half after Butker’s extra point to cap a nine-play 86 yard drive.

Dean Pees’ Titans defense stopped the Chiefs from adding to their lead after the break, forcing a punt at the end of a 10-play drive that had included four incompletions thanks to some superb downfield coverage.

Having held the Titans to a punt in reply, Kansas stretched their advantage to 11 on a 13-play drive that included an uncharacteristic 10 runs – the latter of which saw Damien Williams stride in from three-yards out on second-and-goal. Butker’s kick was good yet again.

Stay up-to-date with the latest NFL news and features

The Chiefs were in command and an increasingly-loud Arrowhead knew it. Such was their momentum that Tannehill was sacked by Tanoh Kpassagnon for an eight-yard loss on the ensuing drive, with Tennessee forced to punt on fourth-and-15.

A Mahomes clinic continued on a third-and-six later in the fourth quarter as he escaped the pocket before unleashing a 60-yard deep ball to an open Watkins, who raced to the house to take his side a step closer to Miami.

Vrabel’s invention wouldn’t be deterred though, and the Titans head coach kept things interesting with a fake punt on fourth-and-eight that saw Brett Kern pass to Amani Hooker for 28-yards.

Four plays later Tannehill located Anthony Firkser for a 22-yard touchdown, the Titans opting for the field goal rather than the two-point attempt despite trailing by two scores.

Back-to-back penalties from the Titans, included pass interference against Tramaine Brock, helped the Chiefs chew the clock to leave Tennessee down by 11 points and out of timeouts at the two minute warning.

The Chiefs defense ended it in style, sacking Tannehill for a loss of 17 yards on a desperate fourth-and-six, ending what will still be looked upon as a remarkable season for both him and the Titans, regardless.