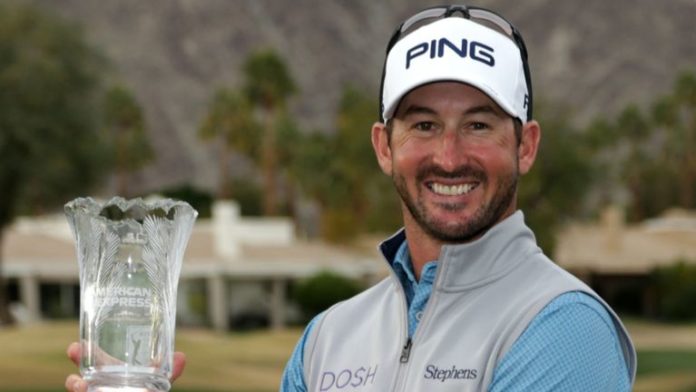 Andrew Landry recovered from a back-nine collapse to snatch a second PGA Tour title with a dramatic victory at The American Express.

Landry birdied his final two holes to close a five-under 67 and claim a two-stroke win on the Stadium Course at La Quinta, having thrown away a much bigger advantage during an eventful final round.

Abraham Ancer fired a joint-low round-of-the-day 63 to claim second spot on 24 under ahead of overnight co-leader Scottie Scheffler, with Bud Cauley a further three strokes back in tied-fourth alongside Austria’s Sepp Straka.

Landry started the day tied for the lead but rolled in a 15-footer at the third and added back-to-back gains from the sixth, before beginning his back nine with three consecutive birdies to briefly go six ahead.

The 32-year-old three-putted from 50 feet at the 13th to post the first of three straight bogeys and open up the tournament once again, allowing Ancer to close the gap by following a front-nine 31 with birdies at the 11th and 14th.

Ancer took advantage of the par-five 16th and drained a 25-footer at the par-three next to move alongside Landry, before closing out his card with a two-putt par to set the clubhouse target.

Landry ended his bogey run with a tap-in par at the 16th and holed a six-foot birdie at the next to take a one-shot lead to the last, where he doubled his winning advantage with a closing birdie.

Scheffler ended the week with a two-under 70, while Rickie Fowler dropped down into a share of tenth spot after mixing three birdies with two bogeys in a final-round 71.

Nine children killed in pile-up, including six from a home for...