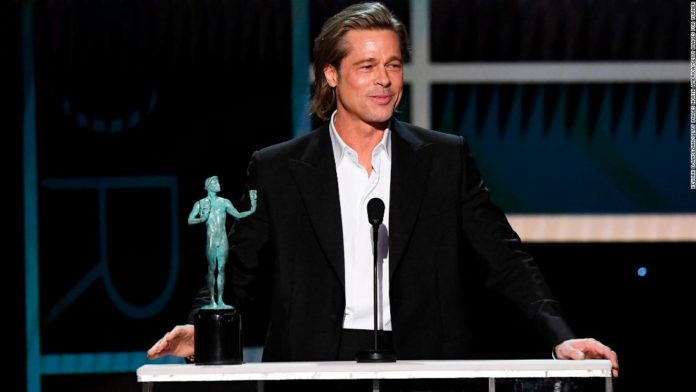 On Sunday, the “Once Upon a Time… in Hollywood” actor picked up the SAG Award for outstanding performance by a male actor in a supporting role. It was Pitt’s first SAG Award.
In opening his speech, he joked, “I’m going to add this to my Tinder profile.”
His went on to take jabs at everything from his director (who he said separated “more women from their shoes than the TSA”) to himself.
“Let’s be honest, it was a difficult part — a guy who gets high, takes off his shirt and doesn’t get on with his wife,” Pitt joked to a laughing crowd.
Pitt was nominated alongside Jamie Foxx (“Just Mercy”), Tom Hanks (“A Beautiful Day in the Neighborhood”), Al Pacino (“The Irishman”) and Joe Pesci (“The Irishman”).
He recently won the Golden Globe in that show’s comparable category.
He’s considered a frontrunner to win the Oscar for best supporting actor.