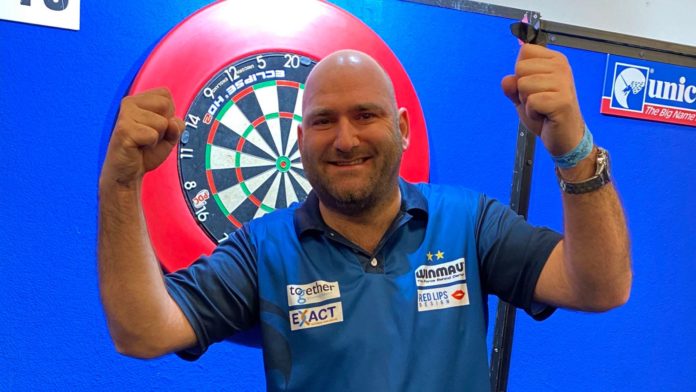 In total, 31 players won Tour Cards over the four days

Two-time BDO world champion Scott Waites was among those to secure a PDC Tour Card on Sunday at Q-School.

The 2010 Grand Slam winner came through the qualifying process to join the sport’s elite, sealing his Tour Card automatically along with Welshman Nick Kenny.

Having struggled on the opening three days of Q School, former Grand Slam winner Waites found his form on the final day, culminating in a 5-0 whitewash of teenage Irish sensation Keane Barry in their Tour Card decider.

“To do this is amazing,” said Waites. “I knew I had to come here today and just win it outright, and I’ve played my game all day.

“Keane is a fantastic player so to beat him 5-0 is amazing, but with a bit of experience he’s going to be an awesome player.

“The time has never been right for me to move over before but now I think it is right to have a go so let’s see what happens.

“I’m going to put a lot of practice in now, this is going to give me the ‘get up and go’ I need.”

Two-time Development Tour winner Kenny will also be a new addition to the PDC circuit after he saved his best performance till last as he averaged 110.5 to defeat Scott Taylor 5-2 in their Tour Card play-off.

Lisa Ashton was another high profile player to achieve their goal on Sunday.

Junior Darts Corporation Chairman Steve Brown was unable to attend the final day of Q School due to JDC-related commitments in China, but his runs on the first two days were enough to ensure a return to the PDC Tour after a five-year absence.

Brisbane Masters winner Damon Heta was successful in his first Q School appearance and he will be joined on the circuit by fellow-Australian and surprise-package Penhall.

Adam Hunt, Alan Tabern and Wayne Jones all secured immediate returns after losing their Tour Cards at the end of 2019, while Peter Jacques returns after a one-year absence.

At European Q School Germany’s Steffen Siepmann booked his place on the PDC Tour for the first time by defeating Wesley Harms 5-3 in the Day Four final in Hildesheim.

However, two-time BDO Championship semi-finalist Harms did enough over the four days to earn a PDC Tour Card for the first time.

“It has been a really tough four days,” Harms admitted.

“My goal was to make the quarter-final every time but after I went out in the last 32 on the first day I was worried, but my last day made up for it.

“Everything will be new for me but I am looking forward to playing in the PDC for the first time.”

Harms’ fellow-Dutchmen Derk Telnekes and Martijn Kleermaker also secured Tour Cards for the first time, while Dirk van Duijvenbode won back his card at the first time of asking.

All 31 PDC Tour Card winners will get their first taste of the PDC ProTour in 2020 at Players Championships One and Two which will take place at The Barnsley Metrodome from February 8-9.