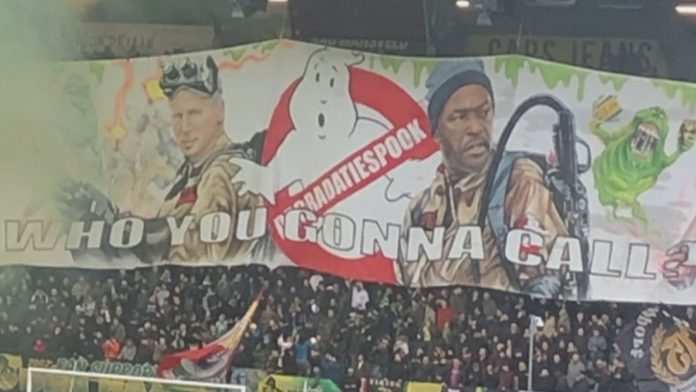 If you are in a relegation battle in Eredivisie, who you gonna call? Alan Pardew and Chris Powell.

The English bosses, who joined Dutch side Ado Den Haag in December, were given an unusual welcome at their first competitive game in charge of the club.

Den Haag fans had a creative tifo made for Pardew and his assistant Powell, depicting their faces on a banner in the style of the 1984 movie Ghostbusters.

There are welcomes and then there are welcomes. Oh my word. Just the start we all wanted, but it’s just a start and we have more hard work ahead of us. Thank you to everyone associated with @ADODenHaag. The gaffer and I are proud to be here with you all. pic.twitter.com/AQVgsn4dq3

The artwork displayed the Dutch word ‘degradatiespook’ which translates into ‘relegation ghost’ – a saying used for teams that need to fear relegation.

However, Den Haag fans may not need to fear relegation much longer, as they beat fellow strugglers RKC Waalwijk 2-0 in a crucial bottom-of-the-table clash on Sunday.

Pardew has already stamped his mark on the team, bringing in five players on loan in January – four of which from English clubs.

Sam Stubbs, George Thomas and Laurens De Bock, signed from Middlesbrough, Leicester and Leeds United respectively, all made their debuts in the victory.