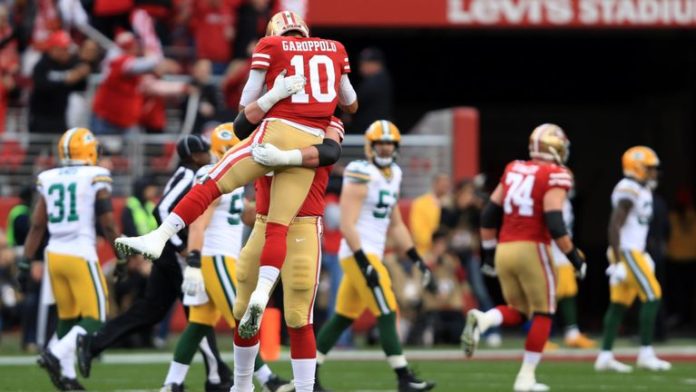 Raheem Mostert had 220 rushing yards and four touchdowns as the San Francisco 49ers beat the Green Bay Packers 37-20 in the NFC Championship game to reach Super Bowl LIV, where they will face the Kansas City Chiefs.

27-year-old running back Mostert – who was cut by six different NFL teams before joining the 49ers in 2016 – set a franchise postseason record with 220 yards on 29 carries, the second-most in a playoff game in NFL history.

As a team, the Niners had 285 yards on the ground, with Deebo Samuel and Tevin Coleman adding 43 and 21 yards, respectively.

The emphasis on rushing – and dominance on the ground – meant that quarterback Jimmy Garoppolo threw just eight passes, completing six of them for 77 yards.

Meanwhile, Aaron Rodgers put up a valiant second-half effort to end 31 of 39 for 326 yards and two touchdowns, but he was intercepted once either side of the break.

In the first quarter at Levi’s Stadium, the NFC’s No 1 seed 49ers flexed their muscles.

San Francisco led a six-play, 89-yard touchdown drive, capping it with a 36-yard run by Mostert on a third-down draw play. Rookie receiver Samuel had broken free for 16 and 30-yard gains to set up Mostert’s run down the left sideline.

After a Green Bay drive ended with Nick Bosa dragging down Rodgers, the Niners took advantage of a short field – thanks to a 26-yard Richie James punt return – to extend their lead through Robbie Gould’s 54-yard field goal.

Down 10-0, things only got worse for the Packers as K’Waun Williams came bursting through to sack Rodgers and force a fumble and a nine-yard loss.

With another short field – a shanked JK Scott punt travelling just 23 yards – San Francisco extended their lead to 17-0 through Mostert again. This time, Samuel threw a fantastic block as Mostert dove over the left pylon on a nine-yard effort.

Rodgers and the Packers started to show promise, as the quarterback hit Jake Kumerow for 23 yards and Aaron Jones sprinted for 11 across midfield. However, their woes continued when a mix-up between Rodgers and center Corey Linsley left the ball free on the turf and DeForest Buckner made an easy fumble recovery.

Mostert again broke free – for a 34-yard gain – but the Packers forced San Francisco to kick and Gould converted from 27.

In need of some momentum before the half, Green Bay completely unravelled when Emmanuel Moseley stepped in front of a Rodgers pass in Packers’ territory and just three plays later, Mostert added his third touchdown when he sprinted up the middle for 18 yards and gave the 49ers a 27-0 lead at the break.

To start the second half, the the Packers finally got on the board. Turning to the screen game to counter San Francisco’s pass rush, Green Bay drove 75 yards downfield in 10 plays, and capped it with a nine-yard Rodgers flip to Jones.

But it didn’t take long for the Niners to regain their 27-point advantage at 34-7. They went right back to Mostert and the ground game, marching 79 yards down the field in seven plays – all runs – as back added his fourth touchdown of the day on a 22-yard run.

The Packers didn’t give up, and Rodgers kicked off the fourth quarter with a 42-yard strike to Jimmy Graham that got him all the way down to the goal-line, before Jones plunged in from one yard out. And after forcing a punt on the Niners’ next drive, Rodgers came right back with another huge gain to set up a score.

Davante Adams beat Richard Sherman deep for a 65-yard gain, and Rodgers fired across his body to rookie tight end Jace Sternberger to make it 34-20 with eight minutes left.

However, it was too little, too late and the 49ers took over four minutes off the clock, capping a drive with a 42-yard Robbie Gould field goal, before Rodgers was picked off by Sherman to seal the win for San Francisco.

The 49ers now head to Miami for Super Bowl LIV, where they will face Patrick Mahomes, Andy Reid and the Kansas City Chiefs after they defeated the Tennessee Titans 35-24 in the AFC Championship game.