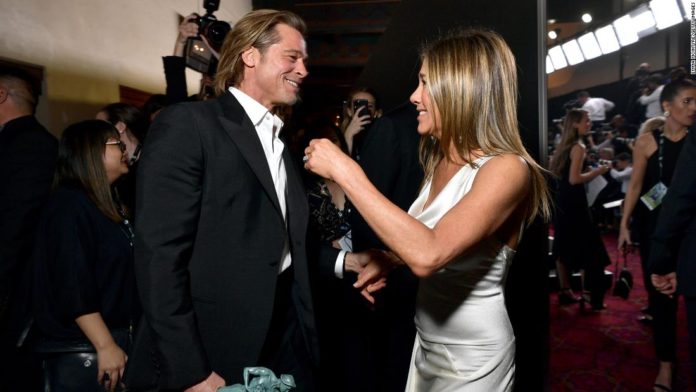 This is why we can’t have nice things.
It started during the show, particularly as Pitt accepted his award for outstanding performance by a male actor in a supporting role for “Once Upon a Time… in Hollywood.”
“Let’s be honest, it was a difficult part,” Pitt joked. “The guy who gets high, takes his shirt off, and doesn’t get on with his wife. It’s a big stretch. Big.”
The camera then cut to a shot of Aniston, who clapped at the quip.
Anison and Pitt were married for five years from 2000-2005.
When Aniston picked up her award for outstanding performance by a female actor in a drama series, some reporters captured Pitt watching her speech on monitors backstage.
“Caught this pretty cool moment when Brad stopped and watched Jen win her Sag Award, he couldn’t stop smiling,” wrote E! reporter Jason Kennedy on Twitter.
Then the two were photographed exchanging hellos backstage. Memes and strong reactions resulted.
At the Golden Globes earlier this month, Pitt called Aniston a “good friend.”
Could it be that these are simply two exes who can be at the same place at the same time and interact kindly toward one another? In the words of Rachel Green, “that, my friend, is what they call closure.”