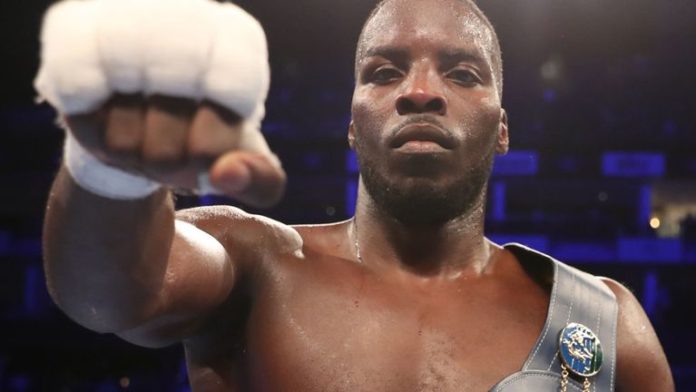 “The heavyweights are big, are able to soak up more damage and have pride when sparring me”

Lawrence Okolie has insisted that he “never feels out his depth” sparring heavyweights and plans to make his mark in the top division eventually.

The European cruiserweight champion hopes to challenge for a world title in his next fight, with talks underway to face Poland’s Krzysztof Glowacki for the vacant WBO belt.

Okolie told Sky Sports that his long-term future lies at heavyweight: “Definitely. If I’m able to accomplish what I want to accomplish this year, then maybe early next year I will move up.

“I’d look to potentially unify [the cruiserweight division] in the fight after, and solidify myself as a world champion this year.”

Okolie is a frequent sparring partner of Anthony Joshua’s and has also sparred with Tyson Fury and Dillian Whyte.

“I feel comfortable,” he said about sharing a ring with bigger opponents. “We’d have to see in an actual fight scenario but in sparring, with bigger headguards and bigger gloves, then athleticism is a bigger factor because you have to move in and out. One big shot isn’t as big of a factor.

“Obviously I punch reasonably hard and I’m strong so I never feel out of my depth with heavyweights.

“I’ve sparred top quality heavyweights and medium heavyweights. I feel comfortable. A lot of cruiserweights don’t want to spar me because either we’re going to fight or physically it is too imposing.

“The heavyweights are big, are able to soak up more damage and have pride when sparring me because [I’m in the division below].”

Fury used Okolie to replicate Deontay Wilder prior to their first fight and has made contact again.

Okolie said “I want to go and help” but may be unable to due to the scheduling of his own next fight.

Evander Holyfield and David Haye are the only two boxers to ever be a world champion at cruiserweight and at heavyweight.

Oleksandr Usyk, who was undisputed at cruiserweight, is plotting to be the third and hopes to challenge Joshua this year.