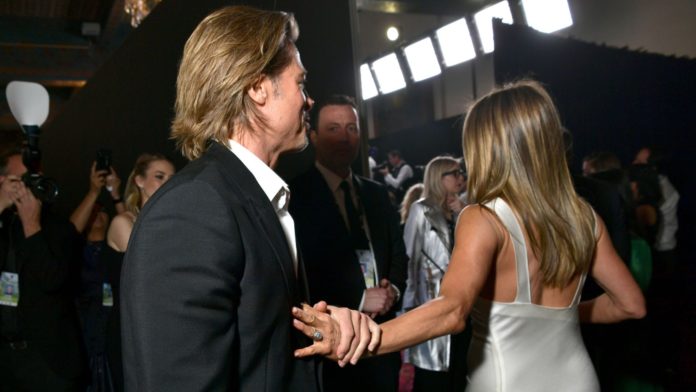 Brad Pitt and Jennifer Aniston have been reunited at the Screen Actors Guild Awards, where they both won prizes.

The former husband and wife warmly embraced as they met backstage, after Pitt picked up outstanding supporting actor for his portrayal of an ageing stuntman in Once Upon A Time… In Hollywood.

They were photographed exchanging words, with Pitt holding on to Aniston‘s wrist as she attempted to head back into the celebrity-filled crowd.

Both were full of smiles, with Pitt clutching his newly collected trophy.

Pitt was married to Aniston from 2000 to 2005, before a high-profile split after which he got together with Angelina Jolie.

Jolie and Pitt, who have six children together, finally married in 2014, but split two years later.

When accepting the statuette, the 56-year-old star had joked about his love life, saying he would have to add the accolade to his “Tinder profile”.

And he added, sarcastically: “It was a difficult part – a guy who takes his shirt off, gets high and doesn’t get on with his wife. It was a big stretch, big.”

It’s not the first time he’s referenced the public interest in his relationships, joking as he accepted a Golden Globe earlier this month: “I wanted to bring my mom, but I couldn’t because any woman I stand next to, they say I’m dating.”

SAG shared snaps of Pitt and Aniston as they met on their official Twitter feed, as well as a short video of Pitt watching Aniston as she headed onto the stage to accept her award.

They wrote: “We forever want to watch Brad watch Jen receive her Actor #sagawards” next to the mobile-shot footage.

Aniston took home outstanding performance by a female actor in a drama series for The Morning Show.

It’s her first Screen Actors Guild award since she starred in the sitcom Friends.

Other big winners on the night were Renee Zellweger, Joaquin Phoenix and Laura Dern.

In the world of TV, Phoebe Waller-Bridge took home yet another prize for Fleabag, and The Crown and The Marvellous Mrs Maisel both had double wins.