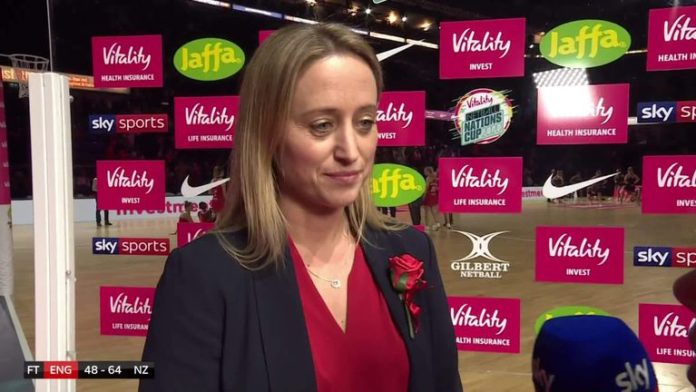 Jess Thirlby, the England Roses head coach, conceded that a few too many errors proved to be costly as the home side fell away and lost to New Zealand in their first match of the Vitality Nations Cup in Nottingham.

The encounter marked Thirlby’s first outing as head coach on English soil and the 64-48 defeat was the Roses’ first meeting with the world champions since last July’s devastating Netball World Cup semi-final.

Both head coaches fielded much-changed outfits to that knockout match as they re-build and re-group after player retirements and individuals taking sabbaticals from international netball.

The Roses’ most productive run of the match came just before half-time as they clawed back five unanswered goals and went in 28-25 down.

However, in the second 30 minutes, the Silver Ferns’ seamless understanding and execution of their gameplan contrasted with the Roses’ work and ultimately brought about the 16-goal victory.

“I think that we gave a good account of ourselves in the first half and in moments in the third quarter,” the head coach said to Sky Sports.

“We pulled it back and asked a few questions of them but, ultimately we made a few too many errors. I think that we could have actually come off at half-time up.

“Tactically there wasn’t anything out there that we didn’t expect but I don’t think that we were quite quick enough to recognise it.”

Throughout the first half, England’s attack-end came under pressure and as the second quarter came to a close, Thirlby decided to change the picture.

George Fisher arrived on at GS and created a target in the ‘D’ whilst Eleanor Cardwell looked comfortable when she moved out at GA.

With the experience of Jade Clarke at Centre and captain Natalie Haythornthwaite in at WA, the momentum of the match shifted and half-time cut the Roses off in their prime.

“I know George can come off the bench and have impact. We saw that in South Africa but actually I thought that the combination of her with El [Eleanor Cardwell] gave New Zealand something to think about,” Thirlby noted.

“It gave us a bit of height in the circle, El in particular is very strong, so I was pleased with that.

“It was great to let it run for a while and some of these partnerships haven’t played full matches and when you’re playing the world champions, sometimes you can’t leave it out there for the whole game.”

The Roses, like all teams in this competition, will now manage a short turnaround before the second match day on Wednesday.

At Arena Birmingham, they will face-off against South Africa, live on Sky Sports and streamed on YouTube. The SPAR Proteas also commenced their Nations Cup campaign with a defeat – 59-54 at the hands of Jamaica.

England and South Africa met six times last year, including a three-Test series in Cape Town, so they know each other well, although the re-introduction of Karla Pretorius adds a new dimension for the visitors.

What we learnt yesterday:
1. Jamaica are back
2. Kiwis have a plan
3. South Africa played 2 shooters
4. England need to expose that talent
5. Australia missed out ?
Great 1st tests at nations cup and expect more twists and turns this week. @SkyNetball

“We got a few combinations out against New Zealand. To have run the game against the world champions, and come away with all 12 players knowing what that was like, will be really valuable for these next two games,” Thirlby concluded.

“I’m sure that we’ll have a slightly different approach (for them). The margins are really tight between selections and it’s a really great place to be in.”

Sky Sports is your home of netball – every moment of the Vitality Nations Cup is being shown on air and streamed on YouTube. The second match-day is on January 22, with England versus South Africa and New Zealand against Jamaica.