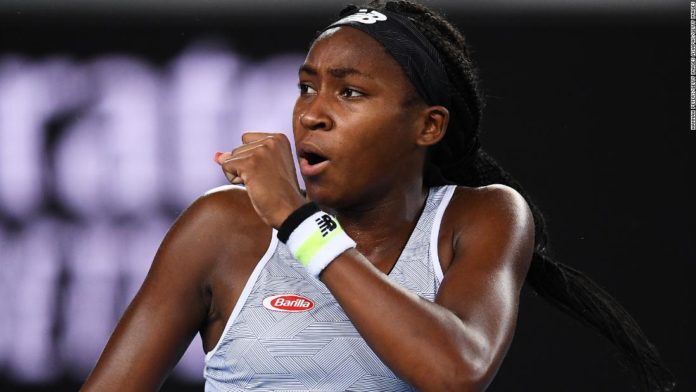 Teenager Coco Gauff defeated seven-time grand slam champion Venus Williams 7-6 6-3 in the first round of the Australian Open on Monday, a rematch of the 15-year-old’s grand slam debut at Wimbledon last year.
Competing in the main draw for the first time in Melbourne, Gauff raced into an early lead in the opening set but failed to capitalize on her advantage.
Williams, 24 years her opponent’s senior and playing in her 85th major, pulled back at the end of the set before going down 7-5 in a tense tie break.
READ: After ending her losing streak in finals, is Serena Williams on course to win the Australian Open?
Gauff again took an early lead in the second set and this time made it count, wrapping up the contest in an hour and 37 minutes.
“I just want to say thank you guys, you guys were chanting my name and I only thought that would happen at the US Open,” Gauff said to the crowd on Margaret Court Arena following her victory.
“To hear that here in Australia means a lot to me.”
Heavy rain at Melbourne Park meant that play was restricted on the first day of the tournament, but Roger Federer, Noami Osaka and Serena Williams, who is chasing a 24th grand slam, were all in action on Rod Laver Arena.
READ: Australian Open: Nadal, Djokovic, Federer lead men’s draw, Serena eyes record-equaling 24th grand slam
All three emerged unscathed in straight sets — defending champion Osaka defeating Czech Republic’s Marie Bouzkova 6-2 6-4, Williams breezing past Russian Anastasia Potapova 6-0 6-3 and Federer bettering USA’s Steve Johnson 6-3 6-2 6-2.
“I haven’t played proper matches in many, many weeks, and probably 95% of the guys are coming here with matches,” said 38-year-old Federer, who won the last of his six Australian Open titles in 2018.
“I think for me really, the first three rounds are key to getting going, to getting used to the pressure, staying calm.
“This is the unknown that can be a little bit scary at times. But today there was none of that because I broke early each set and was able to get on a roll and play freely after that.”
Caroline Wozniacki, who won her sole grand slam title in Melbourne two years ago and will retire after this year’s tournament, also made light work of her first round match, defeating Kristie Ahn 6-1 6-3.