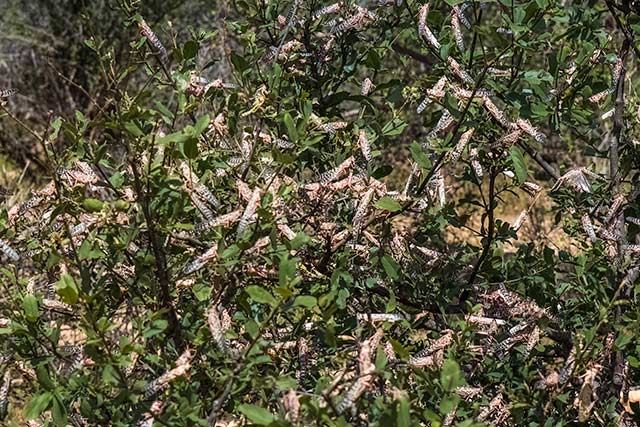 Despite control efforts, Desert Locusts are spreading to new areas of Ethiopia in vast numbers. According to Government data provided   on 07 January 2020,  Desert Locusts  has have infested more than 2 350 km2 of land across the Afar, Amhara, Oromia, Somali, Tigray, and Southern Nations, Nationalities, and Peoples’ (SNNP) regional states, as well as in Dire Dawa city. The insects have spread to around 125 Woredas (districts) – up from 56 in October 2019.

“The invasion could lead to a considerable drop in agricultural production, livestock feed and forest cover, compromising livelihoods and food security in Ethiopia and neighbouring countries,” warned Fatouma Seid, the Food and Agriculture Organization of the United Nations (FAO) Representative in Ethiopia.

Over 1 800 km2 of crop, pasture and forest cover has already been invaded by Desert Locust, an area that continues to grow as fast-moving swarms keep arriving from undetected areas in Ethiopia as well as adjacent areas of Somalia. FAO is currently planning a rapid assessment mission to assemble additional and more granular data on the extent of the swarms and the amount of land potentially affected.

Although aerial and ground control operations have been ongoing since July 2019, a large area of Desert Locust breeding ground in the Somali region remained uncontrolled resulting in cyclic multiplication and formation of new swarms. This situation is exacerbated by heavy rainfall and green vegetation that will allow breeding conditions to remain favourable and may last until June 2020.

Ms. Seid called for concerted national efforts as well as from neighboring and affected countries to fight the Desert Locust threat. “We need an immediate scaling up of surveillance, monitoring, and ground and aerial spraying’. Community mobilization and awareness raising possibly until the end of June 2020 will be important,” she said.

The priority for prevention and control is the Somali Region, where 94 km2 was affected between November and December 2019, as well as the new invasion areas in Oromia and SNNP regions. FAO is working with the Government of Ethiopia, the Desert Locust Control Organization for Eastern Africa and other partners to raise awareness, mobilize resources, and monitor and respond to the Desert Locust invasion.

Humanitarian Visa d’Or Award: Antoine Agoudjian nominated for his story on the humanitarian consequences of the conflict in Nagorno-Karabarkh

Education is a key lifeline for world’s forests