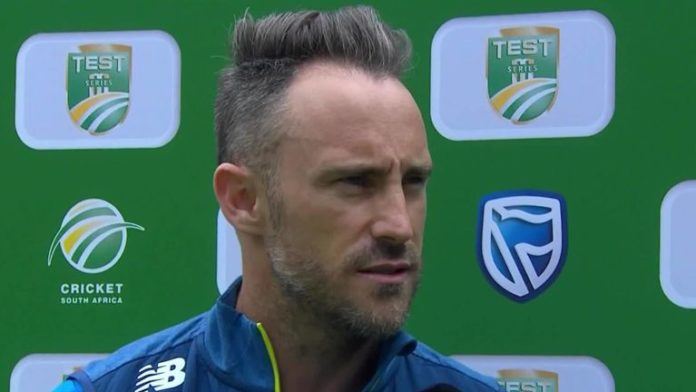 Du Plessis on Rabada’s ban: “It is a big frustration – he is our best bowler and it is not the first time we have lost him for a crucial game

South Africa captain Faf du Plessis says he will remain in the role until the end of the T20 World Cup in Australia later this year.

Du Plessis’ side slipped 2-1 down with one match to play in the four-Test series against England after an innings-and-53-run defeat in Port Elizabeth.

South Africa have lost seven of their last eight Tests, while Du Plessis has averaged under 30 in Test cricket across the last two years with only two hundreds in 19 games.

“I have heard the rumours of possible retirement but I have been pretty clear and consistent with the message that the T20 World Cup is the time-frame I am looking for,” said Du Plessis, whose side will be looking to salvage a series draw by winning the fourth Test in Johannesburg from Friday.

“There is obviously one big Test for this team that we need to focus on and, for me, it’s important we keep driving forward and making sure we apply ourselves to win.

“There are points [in the World Test Championship] so every Test means a lot. After that there is a series in the West Indies and that is it for Test cricket. Nothing has changed.”

South Africa will be shorn of Kagiso Rabada for the final Test at Wanderers, with the seamer picking up a one-match ban after collecting a fourth demerit point inside 24 months for his zealous celebration following the dismissal of Joe Root on day one at St George’s Park.

“It is a big frustration and disappointment – he is our best bowler and it is not the first time we have lost him in what will be a crucial game for us,” said Rabada, who was also suspended from South Africa’s second Test against England at Trent Bridge in 2017.

“We are already a bit light on experience in our Test side and he will be a huge loss. But those are the cards we have been dealt and we have to make the best of it.

“There is no using excuses. We have to regroup, have some firm chats about where we need to get better and make sure we are moving forward.”

The Proteas were then dismissed for 209 and 237, losing 10 wickets for 103 runs on day four, including their final four in the first innings for one run in just 25 minutes.

“England played some really good cricket. They showed application through Pope and Stokes,” added Du Plessis, who scored eight and 36 in the Test.

“Stokes is a thorn in our side – it’s challenging to get rid of him. If you don’t get him out he is going to move the run rate forward and he did that once again. Those two played good innings and laid the platform for guys to come in and play freely.

“With 500 on the board, you need to make sure you put on a fight and a big total in your first innings to compete for the rest of the game and we didn’t do that. We batted poorly and I don’t think we played [Dom Bess] very well.

“The team and I are feeling the pressure of not performing to the standard we should but we will keep trying and fighting. As a batting unit we need to be better.”

Watch day one of the fourth Test, in Johannesburg, live on Sky Sports Cricket from 7.30am on Friday.