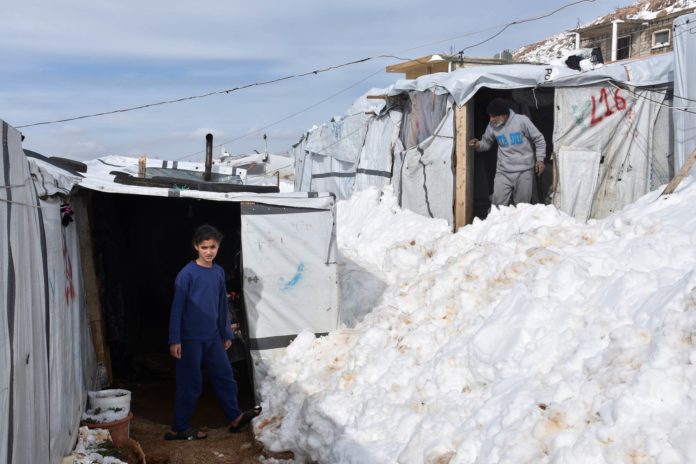 In 2015, the government asked UNHCR to stop registering Syrian refugees, and it prevents construction of permanent refugee camps. Most of the refugees live in homes and apartments, according to UN data. But the number living in informal settlements has grown as some refugees who had lived in rented apartments exhausted their savings and moved to tents. At the end of 2019, Medair reported 302,209 Syrian refugees living in more than 6,000 informal camps, up from 236,000 in late 2016.

“The high rental costs and limited shelter space in Lebanon coupled with the no-camp policy in the country pushed Syrian refugees to seek shelter in hundreds of spontaneous informal settlements,” says Lisa Abou Khaled, a spokesperson for UNHCR.

Refugees rent space from landowners with unused plots of ground—usually in agricultural areas—and erect tents made from wood and tarps. UNHCR and other organizations provide some building materials and give cash assistance to some of the neediest families, but many refugees pay rent out of pocket, typically about $50 a month.

The decentralized and informal nature of the refugee system—along with the general lack of street addresses in the country—makes providing aid or responding in emergencies like floods and fires a daunting prospect, Hanna says.

When Hanna graduated from university in 2013 with a degree in computer science and a minor in GIS mapping, she didn’t expect to go into humanitarian work. But she quickly learned that her skills were in demand in the growing refugee response effort.

When Medair began mapping the settlements in 2013, workers found isolated camps that had never been visited by aid organizations or received any services. “No one knew they were there, even, and the reason for that is some sites it took us a 45-minute drive from the nearest highway or the nearest main road to get to them in the middle of nowhere,” Hanna says. “But those are the most vulnerable—those are the people who actually need the assistance.”

The maps were crucial during last year’s severe winter storms, which left many camps inundated, allowing aid groups to find the settlements in need of help bailing out water or supplies like fresh mattresses and blankets.

The first maps, in 2013, covered the Beqaa Valley, which hosts the country’s highest concentration of refugee settlements. In 2014, in coordination with UNHCR and several other NGO partners, Medair expanded the mapping project to all of Lebanon.