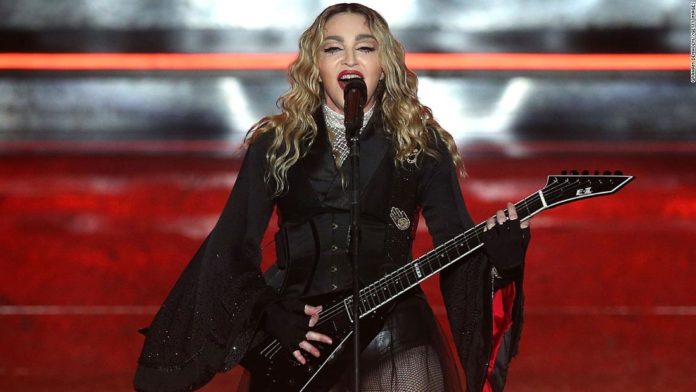 In the latest setback to her current tour — which has been blighted by delays and cancellations — tickets holders who arrived at Sunday’s show in Lisbon, Portugal were greeted with a message informing them that it would not be going ahead.
Madonna had been scheduled to take the stage at the Coliseu theater at 8.30 p.m. Images shared on social media show concertgoers queuing outside the venue.
The 61-year-old superstar later told fans on Instagram that she was forced to cancel the show for medical reasons.
“Sorry I had to cancel tonight,” she told her 14.7 million followers Sunday night. “But I must listen to my body and rest!”
She added that “fingers crossed” she would be well enough to perform on Tuesday night.
Madonna is due to perform at the same venue on Tuesday, Wednesday and Thursday before heading to the London Palladium.
In a video posted to social media last week, she was shown wearing knee supports while rehearsing for an earlier show in Lisbon. “How an injured Madame X warms up for a show,” she wrote in the caption. “Very carefully.”
The mother-of-six has not disclosed the nature of her injury.
CNN has reached out to Madonna’s representatives for comment.
Madonna’s axed Lisbon date is not the tour’s first cancellation. The singer previously canceled dates in New York City, Los Angeles, Boston, Miami and Paris, citing production issues, injuries and scheduling limitations.