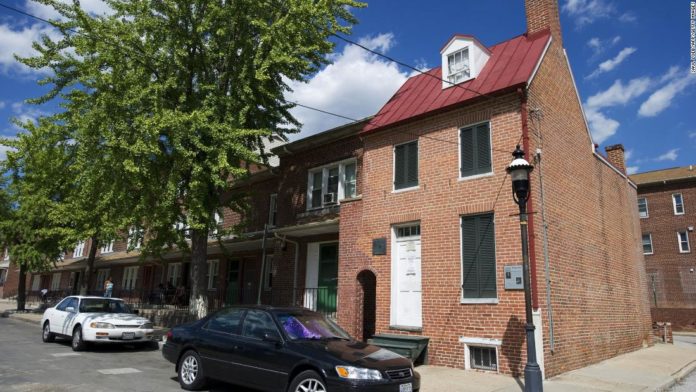 (CNN) — Poor Edgar Allan Poe. In life, he was a haunted writer whose Gothic works went largely unappreciated. In death, he’s a celebrated literary icon whose talent has earned him no fewer than three memorial sites.

The newest of the bunch was just ordained a Literary Landmark, and on what would’ve been the minister of the macabre’s 211th birthday. Poe was never one for parties, though.

The Edgar Allan Poe House in Baltimore, where the author briefly lived in the 1830s before returning and dying under mysterious circumstances, has served as a museum for more than 70 years and a National Historic Landmark for nearly 50 years.
His Philadelphia residence is already a national historic site — the National Park Service says the six years he spent there were the “happiest and most productive” of his life — and there’s a museum dedicated to his life in Richmond, Virginia, though he never lived in the historic building where it stands.

The author might’ve hated all the hubbub around his literary legacy, though he was known for writing for mass appeal.

His Baltimore residence is the second of his homes to be deemed a Literary Landmark, a distinction for significant literary sites from the American Library Association’s advocacy division, United for Libraries.

Poe didn’t live in the unassuming red-brick flat for long, but his impact on the city has manifested in peculiar ways: His most famous poem is named for a raven, and, 100-plus years later, so is Baltimore’s NFL team. It’s where he got his start in writing, and now, the city celebrates “Poe-Tober” in October to honor the spooky antics he might’ve enjoyed.