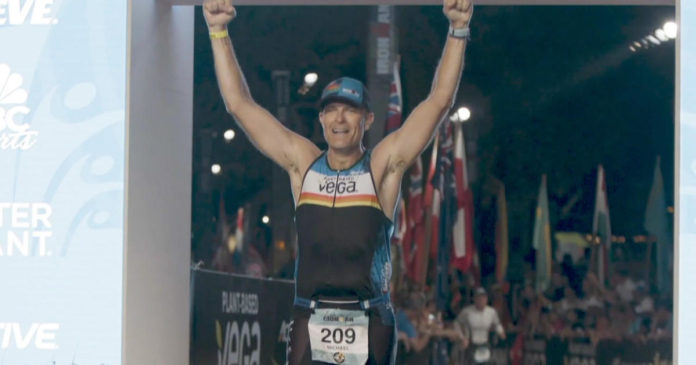 The Recording Academy’s charity, MusiCares, helps musicians in need with critical medical and financial assistance. As part of our Road to the Grammys series, Anthony Mason highlights its chair emeritus, Michael McDonald, a music executive who competed in a triathlon to raise money for MusiCares, which he says saved him.

It would be his first Ironman, a race that begins with a 2.4-mile swim, continues with a 112-mile bicycle ride, and finishes with a full marathon: 26.2 miles.

“I’ve been thinking about doing it for about 25 years,” said McDonald. “It started in the darkest days of my life.”

Twenty-five years ago, McDonald was the tour manager for the Dave Matthews Band, a dream job that was leading him to those dark places. “I was an alcoholic cocaine addict,” he told “CBS This Morning” co-host Anthony Mason. “Because I was fully functional to the outside world, I was lying to everyone.”

“But did you know something was wrong?” Mason asked.

“Yeah, I knew that I didn’t recreate like other people. Other people wanna go to bed. Other people know when to shut it down. And I didn’t. I didn’t have an off-switch.”

In the middle of one wasted weekend, McDonald switched on the TV and stumbled upon the Ironman competition. The competitors’ commitment moved him – and still moves him today

Mason asked, “What did you feel in that moment? It was a watershed moment for you obviously.”

Deep down, McDonald believed he could do it.  But first he had to clean up his act. He reached out to Aerosmith’s then-manager: “I knew Tim was involved with getting the band sober, and getting himself sober. And so, I cold-called Tim Collins. I don’t remember how I got his phone number.”

Collins connected him to MusiCares, which got McDonald into AA and group counseling. “They saved my life,” he said.

McDonald has since built his own company, Mick Management, which handles major artists like Maggie Rogers, Leon Bridges and Jon Batiste.

Last year, as he approached his 50th birthday – and 20th year of sobriety – McDonald decided it was finally time to take on the Ironman.

Mason asked, “Were you worried in any way it would disappoint you?”

“No. I started convincing myself that I might not make it the week of the race. You see, they start laying the buoys for the swim course, and just each day it’s just going further and further out!”

He remembered the hundreds of contributors (including Mason) who were backing him. “I started thinking, ‘Well, they didn’t pay me to finish. I just said I was gonna do it!'” he laughed.

Then, race day finally came in Kona. “Waking up that morning and getting in the water, wow! It was powerful.”

“Yeah, all of it. You may not know this, but I’m a crier,” he laughed. “And I mean literally, I had tears in my goggles, getting into the water.

“I came outta the water and I knew …” he said, tearing up again.

“What did you know?”

In 12 hours and 42 minutes, Michael McDonald completed the 140-mile course. His wife Becky and their daughters were there to greet the Ironman.

Mason asked, “So, how was Kona after all these years of anticipating it?”

“It was everything I dreamed it would be,” he replied. “Kids, weddings, you know, the birth of children, those moments aside, it was the best day of my life.”

As reported by the Recording Academy, McDonald raised over $394,000 for MusiCares and the Ironman Foundation – more than twice his original goal.

This Friday Aerosmith will be honored by MusiCares for its philanthropic work, with a gala tribute featuring such performers as Alice Cooper, Yola, Gary Clark Jr., Foo Fighters and John Legend.

When can we go on vacation again? This is what experts...