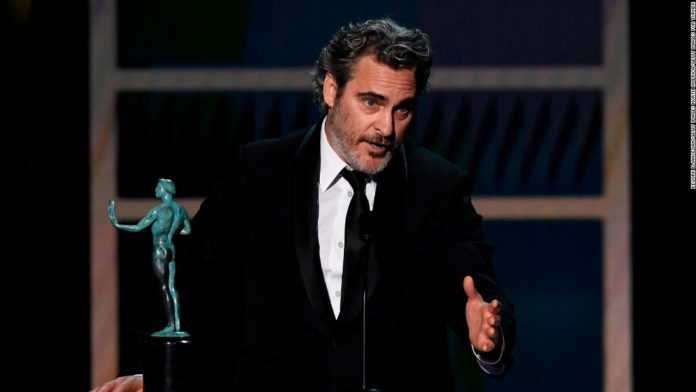 At Sunday’s SAG Awards, the late actor received a heartfelt shout out from actor Joaquin Phoenix as the “Joker” star accepted the award for best performance by a male actor in a leading role.
Ledger famously portrayed the comic book villain in 2008’s “The Dark Knight” and won numerous awards, including an Academy Award, a Golden Globe and a SAG Award.
With his win, Phoenix, an Oscar nominee, is on the way to collecting the same trio of awards for the role.
“Really, I’m standing here on the shoulders of my favorite actor, Heath Ledger,” he said.
Ledger died in 2008 from an accidental overdose. He was 28.
In addition to paying tribute to Ledger, Phoenix took a moment to speak directly to each of his fellow nominees in his category. To Leonardo DiCaprio, who was nominated for “Once Upon a Time… in Hollywood,” he said, “you’ve been an inspiration for over 25 years to me and so many other people.”
He told “Ford v Ferrari” star Christian Bale that he never turns in a bad performance and “it’s infuriating.”
He also called Adam Driver’s “Marriage Story” performance “devastating” and told Taron Egerton, star of “Rocketman,” that he “can’t wait to see what else you do.”

Daniel Kaluyaa on mute, animal invasions and too many doors – seven best moments of the Golden Globes