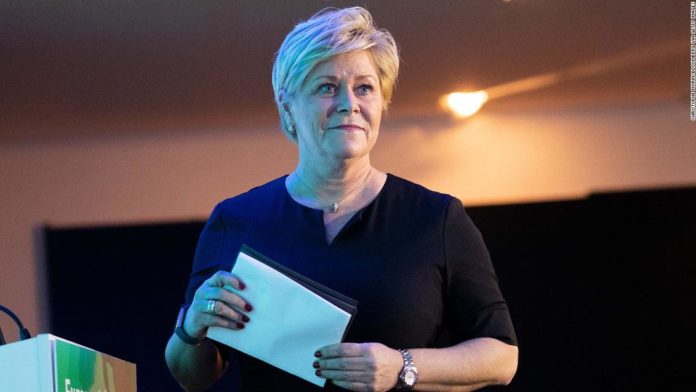 FRP leader Siv Jensen met with Prime Minister Erna Solberg on Monday before telling a press conference she would take her party out of the coalition.
“I’m doing it because it’s the only right thing to do,” Jensen said, adding that she couldn’t get enough of her party’s policies implemented.
Jensen then cited the repatriation of the woman and her two children, who landed in Norway Thursday night, according to a government statement.
“Then came the case with a suspected (ISIS) terrorist woman, the other three parties gave in, to bring home (the) mother and child,” said Jensen.
“We could welcome the children, but we do not compromise with people who have voluntarily joined terrorist organizations and who are working to tear down all the values Norway is built on.”
Minister of Foreign Affairs Ine Eriksen Søreide said she was “pleased” to bring a difficult case to a close.
“The decision to provide assistance to enable the family’s return to Norway was taken on humanitarian grounds because of fears that one of the children is seriously ill,” she said in a statement.
The mother was arrested on arrival in Norway, while the children are receiving health care and will be monitored by child welfare services, the government added.
“These children need a calm environment and must be shielded from public attention,” Søreide said. “I hope that this will be respected.”
Solberg, who leads the Conservative Party, has been Norway’s Prime Minister since 2013. She was re-elected in September 2017.
“Our dilemma became the following: bringing home the child with (his) mother, or risking that a Norwegian, a sick 5-year-old could die,” Solberg said in a statement sent to CNN.
“Faced with these choices, we chose to work to bring the boy home, confident that his mother would be arrested and prosecuted when she came to Norway. Something that is now also happening,” she said.
“I respect that FRP has a different view. This was a difficult trade-off. But for me it was right to help the boy come home to Norway and get help,” added Solberg.
Despite uncertainty around the future of Norway’s government, Jensen said she is “committed to resolving this in an orderly manner and will have a close dialogue with the Prime Minister in the future.”
Solberg said her government will continue until 2021 as a minority propped up by the Liberal and Christian Democratic parties, as part of a confidence and supply deal agreed in January last year.
Many nations have been grappling with the issue of what to do with so-called ISIS brides — women who traveled to the Middle East to join the Islamic caliphate.
European countries have been reluctant to accept ISIS members, and only a handful of countries, such as Russia, Indonesia, Lebanon and Sudan, have allowed ISIS followers to return.
US President Donald Trump has pressured European countries to take citizens who fought for ISIS back from US-controlled prisons in the Middle East, but there is little political will in Europe to allow that to happen.
The UK decided to revoke the citizenship of one follower, Shamima Begum, who had asked to return to the country after being found in a Syrian refugee camp in February 2019. A month later, Begum’s baby son died after his health deteriorated.
These cases represent the legal and moral conundrums facing countries with potentially hundreds of jihadists — many currently in jail or refugee camps — who want to come home.
In January 2019, the French government came in for stiff criticism from opposition groups after it reportedly said 130 jihadi fighters of French origin could return to the country.
In May 2019, Germany’s Foreign Ministry said it would not confirm to CNN how many German nationals were in camps in northern Syria, but only a handful of children born to ISIS followers have been brought back to Germany and placed with relatives.
In a statement to CNN, the ministry insisted that it is “virtually impossible” to provide assistance to any of its nationals in the Syrian camps.