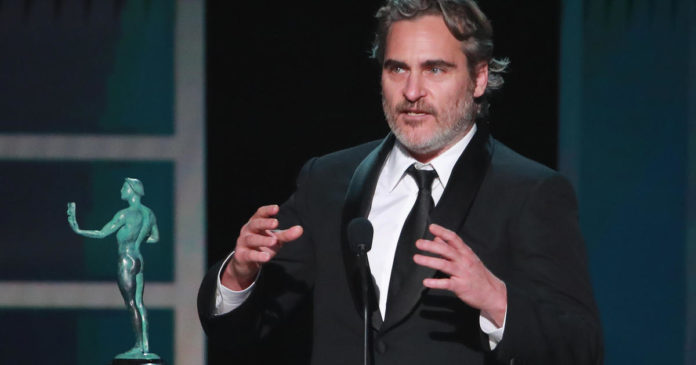 While accepting the award, Phoenix acknowledged his friend Ledger before the crowd at the Shrine Auditorium in Los Angeles.

“I’m standing here on the shoulders of my favorite actor, Heath Ledger,” he said. Ledger posthumously won an Oscar for best actor in a supporting role in 2008 for his demented version of Joker in “The Dark Knight.” He died 13 months earlier from an accidental overdose of prescription drugs.

Phoenix also praised his fellow SAG nominees in the category and saved some especially kind words for “Once Upon a Time … In Hollywood” actor Leonardo DiCaprio.

“When I started acting again and going to auditions, I’d always get to the final callback and there would always be two other guys we’d be up against. And we would always lose to this one kid,” Phoenix said. “No actor would ever say his name ’cause it was like too much, but every casting director would whisper like, ‘It’s Leonardo, it’s Leonardo.’ Leo, you’ve been an inspiration for over 25 years to me and so many people. I thank you very, very much.”

This win marked the second award Phoenix has won for playing Arthur Fleck in “The Joker”; he also received a Critic’s Choice Award earlier this month. In the film, Phoenix, who’s nominated for an Oscar, transforms from a troubled, lonely clown into a murderer. He recently spoke to CBS News’ “60 Minutes” about the role.