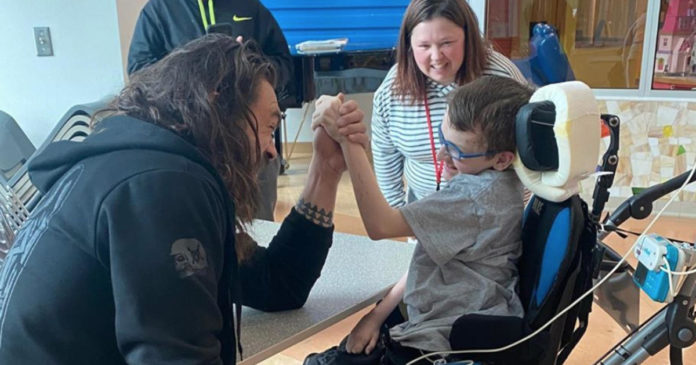 Jason Momoa took time out of his filming schedule to visit kids at UPMC Children’s Hospital of Pittsburgh. While there, the actor challenged a young boy to an arm wrestling challenge and placed a high-stakes bet.

Momoa told a boy named Joshua if he cold beat him in arm wrestling, he could visit the “Aquaman 2” set.

Momoa is currently in Pittsburgh shooting a movie for Netflix, CBS Pittsburgh station KDKA reports. “Sweet Girl” is a thriller, with Momoa playing a husband and father looking for justice after his wife’s death. He will soon be working on “Aquaman 2,” which is due out in 2022.

On Instagram, Momoa posted video of his arm wrestling contest with Joshua — and the strongest man won. Joshua, that is, easily defeated the heavyweight.

Joshua isn’t the only kid Momoa visited UPMC Children’s Hospital. He posted photos of himself with several kids there, writing that “the greatest part of being Aquaman is making children happy.”

“Spreading aloha had a little time before work to stop by UPMC Children’s Hospital of Pittsburgh met so many brave strong babies all my aloha to the families,” wrote the actor, who is originally from Hawaii. He also wrote that he promised arm wrestling champ Joshua his trident from “Aquaman.”

Momoa has made several surprise visits around Pittsburgh since he’s been filming in the city, KDKA reports. He stopped in to a local diner in December after the owner, who knew the star would be in the area, posted a sign out front that read, “Welcome Jason M.” Momoa took the hint and dropped by the restaurant.