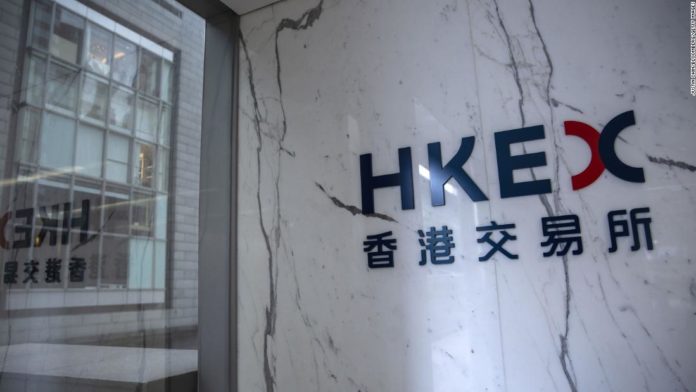 The city’s benchmark Hang Seng Index (HSI) fell as much as 1.9% after Moody’s downgraded the city’s credit rating, citing the “absence of effective response and lack of clarity” on how the government plans to address political and economic concerns. The city has been gripped by pro-democracy protests for months.
The index was last down 1.85%.
Shares of Hang Seng components were down almost across the board. Major property developers like Wharf Real Estate Investment Company and Hang Lung Properties were among the worst performers, having lost more than 3%. Chinese carmaker Geely Auto was the worst performer — down 5.5% by midmorning.
The only component to trade higher was CSPC Pharmaceutical Group, which was up a little more than 1%. Pharmaceutical stocks in Hong Kong and in mainland China jumped Monday as China reported more than 100 new cases of pneumonia caused by a new strain of coronavirus.
On Tuesday, major airline stocks fell as China confirmed that the virus could be spread between humans, fueling fears about how widespread the sickness could become as millions prepare to travel for the Lunar New Year Holiday. At least one Chinese state media outlet, the China Youth Daily, suggested that the nation’s railway operators and airlines waive cancellation fees to help “contain the spread of the disease.”
Air China, China Eastern Airlines and China Southern Airlines — the country’s three biggest airlines — fell between 3.5% and 4% on Tuesday in Hong Kong, where they trade but are not components of the Hang Seng.
Many stocks in mainland China were also lower Tuesday. Theme park operator Jiangsu Tianmu Lake and travel service firm UTour Group each tumbled more than 3% in Shanghai. Pharmaceutical stocks continued to surge, though: Jiangsu Lianhuan Pharmaceutical and Jiangsu Sihuan Bioengineering shot up 10% as markets opened in Shenzhen, hitting their daily limit.
The broader Shanghai Composite (SHCOMP), meanwhile, slumped 1.1%. Elsewhere in the region, Japan’s Nikkei 225 (N225) and South Korea’s Kospi (KOSPI) were down 0.8% and 0.5%, respectively.