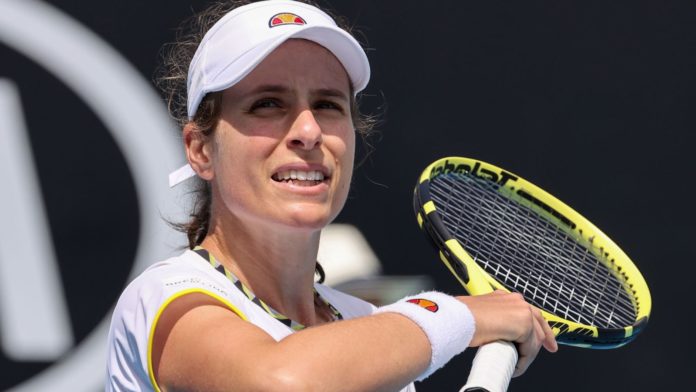 Konta suffered her earliest exit at the tournament with a first-round loss to Tunisian Ons Jabeur at Melbourne Park.

The British No 1, who reached the semi-finals four years ago, was seeded 12th but expectations were tempered by the fact she had only played one match since a quarter-final exit at the US Open in early September.

A knee injury curtailed her season and Konta revealed last month that she might not even make the trip to Melbourne.

She will be heading home a lot sooner than she would have hoped after going down 6-4 6-2 to Tunisian world No 78, who has the type of unpredictable game that even a match-tight Konta finds hard to deal with.

The 28-year-old had always made at least the second round in four previous appearances in the main draw at Melbourne Park, while this is the first time since a second-round loss to Garbine Muguruza here 12 months ago that she has not reached at least the quarter-finals of a Grand Slam.

Konta took solace in the fact her knee is much improved and felt she paid for a lack of matches.

I knew that by taking a decision to come play here, I was opening myself up to potentially it not going well or for it to be difficult.

She said: “It’s an unfortunate thing. It’s part of the sport and it’s part of also the way I play, and it’s something that will come with time and matches.

“I think ultimately the main thing was to start playing again, and I am. And how I physically felt out there is obviously a massive tick for me compared to where I was in September of last year.

“I think giving myself that time to find a level that I want to play is going to be important. And I also played a very good opponent. So it’s not all on my racket.

“I knew that by taking a decision to come play here, I was opening myself up to potentially it not going well or for it to be difficult.”

Konta must now decide where to play next, and she may seek a wild card into the St Petersburg Trophy, which begins two days after Britain’s Fed Cup play-off against Slovakia.

Konta said she would not reconsider her decision to miss the tie in Bratislava on February 7-8.

Edmund had a tough draw against in-form 24th seed Lajovic but had led 5-2 when the rain arrived on Monday.

Lajovic won three straight games on the resumption though, and took the opening set on a tie-break to the delight of his noisy Serbian fans.

The match continued to be close but any glimmers for Edmund were snuffed out by Lajovic, who completed the victory with a running forehand winner.

Edmund has now lost in the first round on both his visits to Melbourne Park since making the last four in 2018.