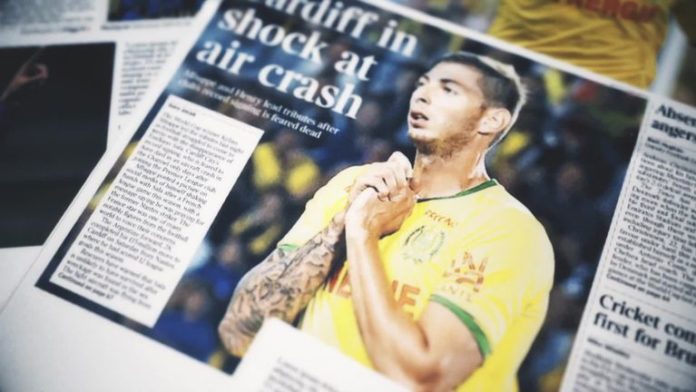 A year after his death, Emiliano Sala’s family are calling on the authorities to speed up their work because there are still so many unanswered questions over what happened.

Sala, 28, who had just become Cardiff City’s record signing, died when the plane he was travelling in came down over the English Channel.

The news devastated the footballing world and the plane’s pilot – David Ibbotson – has still not been found.

The Argentinian striker was heading to the Welsh capital from Nantes, where he had played for four years. He was the club’s star striker, having scored 42 goals in 120 games.

Cardiff had been monitoring Sala for some time, hoping he could boost the club’s chances of keeping their place in the Premier League.

But, in the months after Sala’s disappearance, attention soon turned to his transfer fee as both clubs entered a bitter legal battle over who should pay the £15m.

Sala’s family are desperate for answers and say they will be marking the anniversary in “private, quiet contemplation of their loss”.

Meanwhile, there still hasn’t been a full inquest, police enquiries continue and the final report into what happened that night is yet to be published.

The Air Accident Investigation Branch (AAIB) says its report is now at an advanced stage and that it will be published by the end of March.

As part of its work, it has been “looking at a number of elements, including operational, technical, organisational and human factors that could have caused or contributed to the accident”.

However, the AAIB has come in for criticism with some saying there were missed opportunities to gather important physical evidence.

The original search and rescue operation for the Piper Malibu plane was called off after three days but Sala’s family pleaded with the authorities to keep looking.

Desperate for answers, they started fundraising for a private search which would be led by world-renowned oceanographer, David Mearns. Almost immediately, he managed to locate the wreckage and Sala’s body was recovered and we now know that Sala had come into contact with harmful levels of carbon monoxide.

Mearns has been highly critical of the AAIB’s investigation and says the entire wreckage should have been recovered, while it was still possible.

He told Sky Sports News: “A number of opportunities were missed and now the families are left without having physical evidence, without having real proof of what the defect was that allowed carbon monoxide to enter the cabin.

“Why did they have to wait until the summer time to find out about the carbon monoxide poisoning? When were these toxicology tests done? Why weren’t they done earlier? Why was that information released so late?

“All these things led to a passage of time, during which the physical evidence on the sea bed was being destroyed and ripped apart by shipping trawlers and spread all over the English channel.”

Sala had turned down Cardiff’s initial offer of a commercial flight. Instead, it was football agent Willie McKay who organised a private plane through a company he had previously used.

But the AAIB’s preliminary report found that the aircraft was not licensed to fly commercially.

Sala had messaged McKay’s son, Jack, who at the time was playing for Cardiff, about the arrangements.

7:43pm – Jack McKay: “My dad has told me that you are going home tomorrow. He could organise a plane to take you directly to Nantes and to come back on Monday, at a time that suits you, so you can get to training on Tuesday.

7:51pm – Emiliano Sala: “Ah that is great. I was just in the middle of checking if there are some flights to get to Nantes tomorrow”.

Once Sala was on the plane, he sent voicemails to friends expressing concerns about the safety of the plane. He could be heard saying: “It feels like it’s falling to pieces.” A key part of the AAIB’s investigation will be to establish how Sala was exposed to harmful levels of carbon monoxide.

Cardiff City’s chief executive Ken Choo is calling for better regulation of “grey charters” and says this can never be allowed to happen again.

Sala was the golden boy at Nantes and their record goal scorer. Now there is a focus on his transfer fee and who should foot the bill – FIFA ruled last year that Cardiff should pay the first £5m instalment but the club has now appealed to the Court of Arbitration for Sport.

Choo insists he doesn’t have any regrets over the way the club has handled the situation.

He told Sky Sports News: “I think we have always maintained our position. If we are required to pay the money, we should. But if you look at the legal process and the contract, it is very clear, it is not the case.

“January 21 isn’t about the dispute of funds and contracts, which all of us have our point of view on. It is about the memory of Emiliano, the pain the families and friends are experiencing. That should be the focal point.

“He was an amazing player. We still feel the same way about him today as we did. He would have made a lot of difference to our performance.”

Sala had been saying farewell to his former teammates at Nantes on the day he died. He even posted an image with friends on social media, just hours before the accident, which was captioned “the last goodbye”.

After his disappearance, a sea of yellow flowers, symbolising the club’s Canaries nickname, started to build outside Nantes’ training ground. Some fans were visibly shaken, in floods of tears.

A year on, Nantes are to put a commemorative shirt on sale “inspired by Sala’s home country” and wear it in their Ligue 1 match against Bordeaux on Sunday. Proceeds of the shirt sale will go to Sala’s two previous clubs in Argentina – Club San Martin de Progreso and Proyecto Crecer.

Matt Miazga, who is now at Reading, played alongside Sala last season. The pair would share jokes in the changing rooms.

Miazga recalls how they would play tricks on each other, putting talcum powder in each other’s shoes or Vaseline on the locker-room doors. The news of Sala’s death hit him hard.

“It’s just crazy to think that something like that in this day and age can happen. I remember memories of him right before training on the stationary bike warming up and we were practising with each other. He would try to practise English and I would practise French…

“It’s obviously sad to see a tug of war between clubs and FIFA. Someone passed away. Someone isn’t here anymore and there are fights over money…we should be celebrating his life and his accomplishments on the pitch”.

There has been an arrest in connection with Sala’s death. A 64-year-old man from Yorkshire was arrested last summer on suspicion of manslaughter by an unlawful act. He remains under investigation, but as yet no charges have been brought and Dorset Police’s investigation continues.

Some have tried to exploit Sala’s death. In September a couple were jailed for accessing CCTV footage of his post mortem examination. Firm manager, Sherry Bray, 49, was sentenced to 14 months and her employee Christopher Ashford, 62, was jailed for five months. The police had started an investigation after an image, appearing to be Emiliano Sala’s body, appeared on social media.

The family’s primary focus is for the full inquest to take place as soon as possible so they can finally learn the truth about what happened that night.

Sala’s ex-girlfriend, Berenice Schkair, who lives in Argentina, described the footballer as a warrior.

She told Sky Sports News: “He was a very good person, a good partner, a simple and humble man, a very good friend, brother and son. Emiliano deserves to be remembered because he didn’t have an explanation for his death. His friends and family miss him here in Argentina.

“It was an absurd and inexplicable tragedy. Emiliano Sala will be remembered forever by all of us as a beautiful person and excellent player. We just want to remember him with a smile and in his best moments, without thinking about the frivolousness of club arrangements. He is my angel. I will always keep him in my memory.”